PRIME Minister Robert Fico promises a package with some “interesting surprises” in it to be presented to the Slovak public by the year’s end, and thus only months before the parliamentary elections, taking place in the spring of 2016. 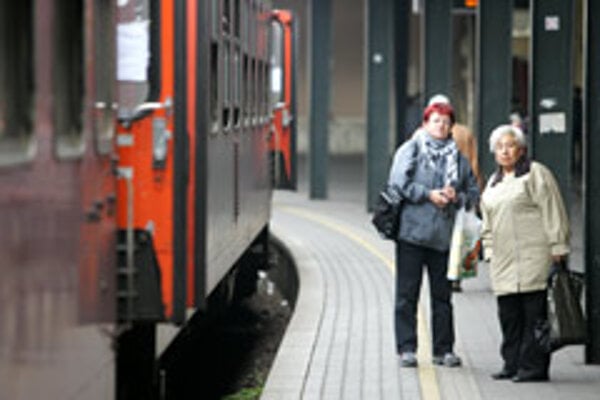 Free trains was one of the main measures of the first package. (Source: Sme - Peter Žákovič)
Font size:A-|A+0

The ruling Smer has apparently divided its social and economic policy in packages of measures: the final package, to be presented at the end of 2015, should only come in the form of pledges that Smer would include in its programme statement if it has the chance to form the government again after the 2016 elections, Fico announced following the party’s congress on May 23 in Bratislava.

Meanwhile, Smer put forward its second package, with measures that are “not mere promises, but actual decisions that the government will carry out”.

The measures included in the package target mainly pensioners and economically weaker families: an increase in the minimum wage, reduction of VAT for selected foodstuffs, cut in payments for medicines used by children and pensioners, an increase of parental and maternity allowances, but also financial contribution for trips and skiing courses of pupils and students and holidays for low-income families. 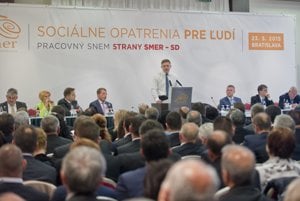 The package comes following a drop in Smer’s preferences, caused by the CT scandal at the turn of the year and the Váhostav affair which is still shaking the Slovak political scene and Smer’s place in it.

In the most recent poll of the Focus polling agency, in May 2015, less than a year before the elections, Smer dropped from 37.4 percent in April to 33.2 percent. With such an election result Smer would most likely need a coalition partner for a possible government.

Smer’s popularity dropped mainly among pensioners and socially weaker families in May, Focus’ analyst Martin Slosiarik told the Sme daily. The package introduced by Smer could help bring some of them back into Smer’s electorate, Slosiarik said.

Smer is trying to address the voters who were disappointed by the recent scandals, including the Vahostav affair that affected a number of small businesses who will lose their money on it, political analyst Miroslav Kusý said in an interview with The Slovak Spectator.

“This disappointed the voters and Fico is trying to draw them back with his social package,” Kusý said, labelling the package a pre-election campaign.

Analysts generally agree that the social packages are an important part of Smer’s campaign prior to the elections, despite the fact that Fico refuses such claims.

“The question is whether these are the right priorities for distributing [the public resources],” Kusý told The Slovak Spectator, adding that this might be pleasing for some groups, but most of them do not pose a benefit for the society as a whole.

In a democracy, it is not that one person can say they can decide on their own about distributing public resources.

“This is what Fico does not respect,” Kusý said.

Opposition leaders were quick to criticise Smer and Fico for what they see as using public resources in the election campaign.

These measures are tailor-made to fit a group of people that the governing Smer party believes are its supporters, Freedom and Solidarity (SaS) party leader and MEP Richard Sulík reacted.

Most-Híd chairman Béla Bugár weighed in by saying that the package of measures confirms that, since it took power three years ago, the government has failed to introduce systemic measures to improve people’s standards of living. Smer has devoted its attention in the past three years to catering to the interests of entrepreneurs close to the party, rather than addressing problems plaguing regular people, according to Bugár.

Christian Democratic Movement (KDH) vice-chairman for public finances Miloš Moravčík called the package a “disappointment” for people, as the cabinet had only earmarked €200 million for it.

“This is not only less than the amount of the first package, but first and foremost it's just a fraction of the increase in revenues from taxes and levies,” said Moravčík. The Smer party has already distributed one package of finances since it took power in the spring of 2012 – a total of €1.4 billion to oligarchs and sponsors, said Christian Democrat (KDH) vice-chair Pavol Zajac on May 22.

In his speech to the May 23 congress, Fico also did not spare critical words towards the opposition, saying that the 2016 elections will be about solidarity versus unlimited individualism. He claimed Smer is the most stable party in Slovakia, while the opposition is ever more fragmented, the TASR newswire reported.

The opposition does not have much chance against Smer in its current condition, but it can definitely point out the problematic aspects of the measures proposed by Smer, Kusý noted.

The opposition is, however, not doing much in this regard and the media are much more active instead,he opined.

Fico also mentioned the possibility that some of Smer’s top posts could see personnel changes, but did not specify any details.

There were major changes in Smer following its previous congress in June 2014, when ministers in the economy and education departments were exchanged.

Kusý expects Fico to be much more flexible in the personnel politics of Smer, which he has already shown in health care when he let the parliament’s speaker and the health minister fall because he saw the CT scandal had a negative response among the public.

“Fico pays a great deal of attention to the signals in the public and tries to react accordingly,” Kusý said.

Zuzana Vilikovská contributed to this report.