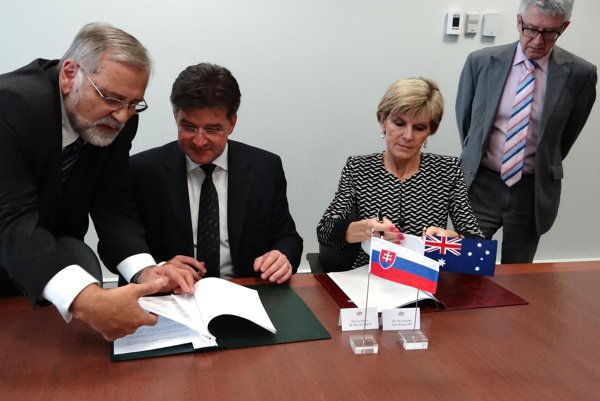 Under a new agreement, young people from Slovakia and Australia will be able to study, work and travel in the other country, ministry spokesman Peter Stano informed the TASR newswire. Based on the scheme, both governments will issue 200 visas a year for people between 18 and 30 years of age.

“I believe this programme will be used aside from our students in Australia also by Australian students, to explore Slovakia and Central Europe,” Lajčák said.

During the second day of his official visit to Australia, Lajčák agreed with Bishop on the need to intensify existing cooperation, where they see untapped potential. Lajčák offered the possibility of cooperation within the Visegrad Four Plus format. Talking economics, Lajčák also supported the idea of a free trade agreement between the European Union and Australia.

They also discussed the situation in Arab countries and the Islamic State, focusing on the problems with foreign fighters – citizens of the EU and Australia who voluntarily depart to conflict zones and pose a security threat when they arrive back home. Lajčák and Bishop also touched on the migration issue that EU and Australia both face, and discussed the possibilities of mutual exchange of experience.

There are many things that Slovakia and Australia have in common, Lajčák opined.

“Apart from a numerous expat community, and about 1,500 Slovaks who currently study in Australia, we are connected by common values, views of international issues and the fact that we face the same challenges like terrorism, migration and climate change,” he said.