THOUGH parliament is promising to protect unique finds at Bratislava Castle, which date from Celtic times and are situated close to the construction site of controversial garages, activists argue there will be insufficient protection of the discoveries and are even considering criminal complaints. 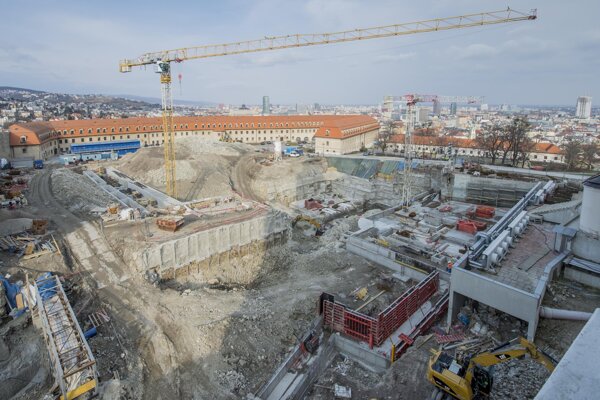 Changes to the current plans at Bratislava Castle, which seek to preserve the finds but also count on completing the controversial garages, were presented by Parliament Office head Daniel Guspan and architect Ivan Masár on May 22. They come as a result of talks with experts and the public and parliament’s accommodation of the criticism, Guspan said.

They are likely to be approved also by the Regional Monuments Board Office, which is expected to release a binding resolution to ensure that the finds will be displayed, the TASR newswire wrote.

However, activists are not satisfied with the plan and say that the finds may be destroyed.

“If the situation is not changed in favour of the monuments, we will submit a criminal complaint,” Monika Kozelová of SOS Bratislava Castle initiative told The Slovak Spectator. They have also turned to the president, she added. 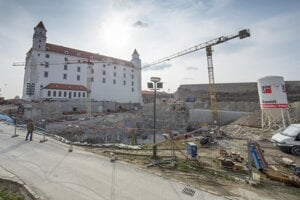 “Our priority has always been and will be to preserve finds discovered on the northern terrace of the castle,” Guspan told the press, as quoted by TASR. “I’m glad that along with experts we have found a solution.”

The solution will not hinder the Bratislava Castle reconstruction project, he added. It will concern the winter riding school and north-western bastion, where a sheltering structure will be built.

“We want all finds and artefacts to be displayed in a dignified manner that will correspond to their value,” Guspan stressed.

The find under the winter riding school and the one at the north-western bastion will be covered. In part of the winter riding school under which there are walled constructions from ancient times, there will be a floor that can be raised. When it goes up, visitors will see under their feet the entire archaeological discovery. Also the space at the north-western bastion will be covered more than originally planned to house the finds there, but it will remain open to the public, Guspan explained, as reported by the SITA newswire.

The finds are, however, still in danger as construction work is continuing nearby, according to Kozelová. Though they are preserved, nobody can say how they will look after they are uncovered, she added.

Moreover, during construction work some objects have been damaged, said Juraj Puškár, head of the Chamber of Restorers in Slovakia.

Kozelová also reminds of the promise made by Speaker of Parliament Peter Pellegrini in March that there would soon be a meeting of experts who would discuss the possible use of the garage spaces. This, however, has not happened.

“Our architects had been preparing for this and had found several possibilities, based on examples from the Louvre or Budapest,” she added.

One of the plans was to move the winter riding school underground which would create new cultural space. This would also provide sufficient protection of the finds, Kozelová said.

Therefore the activists ask why the construction works take place there, Kozelová said.
“We were also asking whether the lands on which the garages will stand were removed from the national cultural monuments list, and they were not,” she added.

One of the best solutions for protecting the excavations should be to preserve them and then to cover them with soil. This is the best solution as they are not exposed to changes of the climate, said Ivo Štassel, head of Bratislava’s Conservation Institute.

“As soon as you exhibit them in the air, even if they are preserved, they gradually deteriorate,” Štassel told The Slovak Spectator.

The parliament, however, decided to exhibit both objects which will require some investments into the space where they should be located in order not to destroy them. This means they will have to be in a stable climate with constant temperature and humidity, and also out of day light.

“This will, however, be an expensive solution as they will have to be preserved 365 days a year,” Štassel added.

Despite its decision to continue in constructing the garages, the parliament made one modification to the project: it added a separate elevator for those using the garages. This will allow the use of the garages for other purposes, Guspan said, as reported by the Denník N daily.

Pellegrini already offered part of them to the Academy of Fine Arts and Design (VŠVU) to exhibit student work. The school’s rector Stanislav Stankoci, however, told Denník N that they turned down the offer as the spaces are not suitable for exhibitions.