THE GLOBAL multi-industrial company Johnson Controls, active in Slovakia especially in the automotive industry, is strengthening its presence in the country. 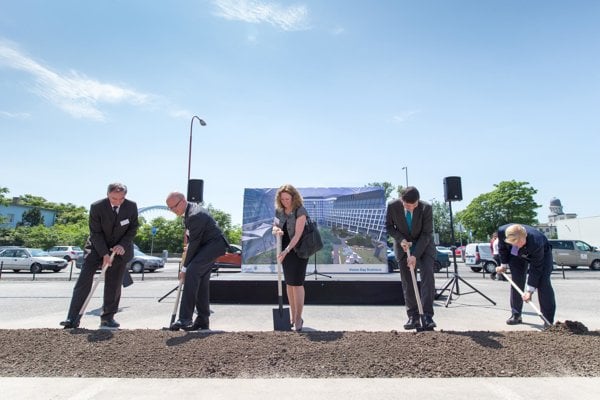 On June 2 it introduced its vision for the company’s largest business centre worldwide located in Bratislava. Its employees, currently having offices at three places in Bratislava, will move into a new building in 2017.

“Our business centre in Bratislava plays an important role in the strategic growth of our company and the new building will offer room for potential future growth,” said Sue Vincent, vice president and corporate controller of Johnson Controls.

Johnson Controls launched its business centre in Bratislava (BBC) in 2007 and since then its labour force increased from 200 to current 1,700 people. It supports all business units of Johnson Controls worldwide with key business functions include purchasing, controlling, internal audit, tax, IT, HR, sales and program management.

Workers will move from its three current buildings on Štúrová and Grösslingova streets to Panorama Business II, a building to be located on Čulenova street close to the Slovak National Theatre and Eurovea on the Danube embankment. The company management promises that the new building will offer a state-of-the art working environment including a canteen, a kindergarten and a fitness studio.

Johnson Controls, company with established core businesses in the automotive, building and energy storage industries, arrived in Slovakia in 1993 and over the past 22 years it opened 10 locations in the country. Besides the business centre in Bratislava it operates a sales and service office of its Building Efficiency business unit in Bratislava, a technology centre for automotive seating and interior components in Trenčín and seven plants for automotive seating and interiors components as well as for complete car seats in Žilina, Lozorno, Lučenec, Martin and Námestovo. Its labour force has increased to current around 6,100 people across the country.

Branislav Ondruš, state secretary of the Slovak Ministry of Labour, Social Affairs and Family, stressed the important position of the company in Slovakia.

“Johnson Controls belongs to the largest and most important employers in Slovakia,” said Ondruš. “It is encouraging and appreciated that the company has created a significant number of high-skilled jobs which to a considerable extent have been taken up by university graduates.”