In total 275 people collapsed from heat over the weekend

Altogether 275 people collapsed in Slovakia from the heat between June 5 to the evening of June 7, spokesman of the Rescue Medical Service Boris Chmel informed the TASR newswire. Out of that, 172 were hospitalised after being treated. 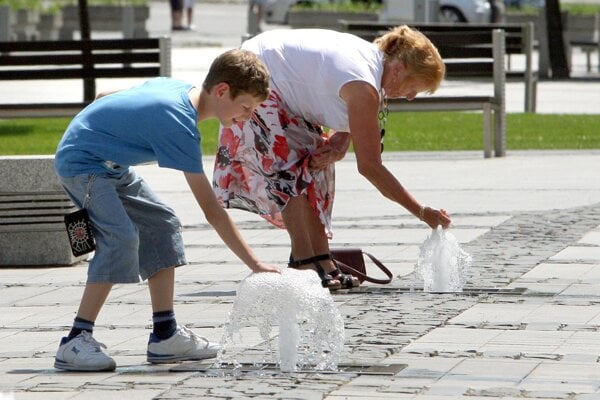 Cooling down from the heat (Source: Sme)
Font size:A-|A+0

Those who proved unable to handle the extreme hot temperatures included 160 women, 102 men and 13 children. Most collapses were recorded in Bratislava Region – 46.

High temperatures will continue on June 8, expected to climb up to 32°C or even 34°C in some places. During the day, storms with 20 to 40 millimetres of rainfall are forecast, with winds of up to 17 to 25 metres per second. On Tuesday, June 9, the temperature should cool down and more rain is expected around Slovakia.

Seniors and children suffer the worst from heat, as do people with cardiovascular diseases and working people who spend the day in the sun. Thus, it is crucial to drink water, take shelter from the sun as much as possible and, if the signs of heatstroke (paleness, sweat, headache, tiredness, weakness, sickness) appear, withdraw to a shady place, drink water and try to cool down, the SITA newswire wrote. It is recommendable to call emergency medical service at 155, too.