THE CORE of the central-Slovak town of Zvolen appeared before the mid-13th century and has kept its face until these days. In this rare postcard from 1907, you can see that a big part of it was still formed by one-storey houses 100 years ago. 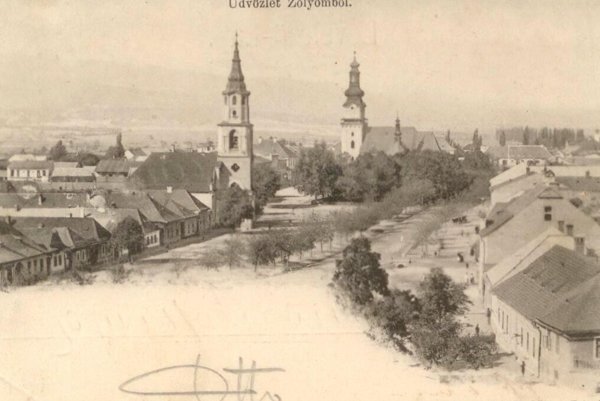 In the old Zvolen, there were also more splendid buildings reflecting the the root of the town’s name – zvolený means selected or excellent in Slovak. Let us, thus, commemorate some which are not standing anymore. Behind the parish church of St Elizabeth, there was a clock tower in the Middle Ages. Built in 1467, a clock machine, or horologium, was installed on its top, brought in from Banská Štiavnica.

It is probable that Zvolen inhabitants were able to organise their lives using time for the first time ever. But the mediaeval technology used to break frequently, and the whole device was replaced after a series of repairs. A new one was imported, together with the clockmaker from the nearby Banská Bystrica – who got 13 guldens for the installation.

When the former parish building was renovated between 1939 – 1940, several interesting murals were discovered. They dated back to around 1450 and included Biblical motifs. A second part consisted of themes not so frequent, for example a satirical scene of hare hunt with the rabbits returning triumphantly carrying a hunter bound to a pole.

A painting was also found here which represented Gothic musical trio – a hare playing the violin, first bear playing the drums, and second bear playing the harp. However, the most remarkable scene was that of a brawl of men playing dice, a rarity in European Gothic painting.