THE INDUSTRIAL Production Index (IPI) rose by 4.7 percent year-on-year in April, being affected mostly by the increase in mining and quarrying (15.9 percent), electricity, gas, steam and air-conditioning supply (9.9 percent), and manufacturing (4 percent). 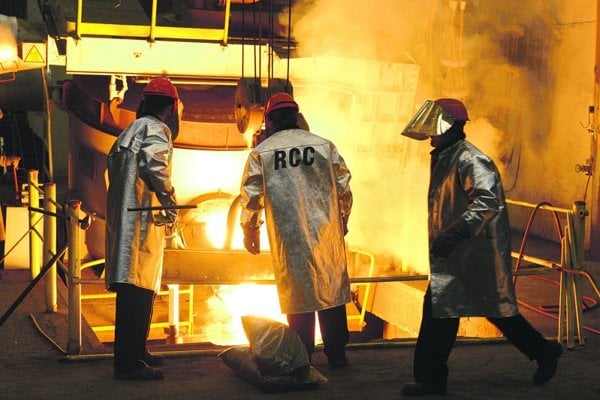 In monthly terms, however, the IPI dropped slightly by 0.9 percent, after seasonal adjustment, according to the data published by the Statistics Office (ŠÚ).

This development confirmed the predictions of analysts that the March numbers were affected by pre-production before Easter.

“Despite this we do not consider the April numbers weak,” Ľubomír Koršňák, analyst with UniCredit Bank Czech Republic and Slovakia, wrote in a memo, “though the industry, as expected, did not stay at record March levels, the seasonally adjusted industrial production was still by about 1 percent higher than in the first two months of this year.”

The corrections of the strong March numbers could be seen in most industrial fields. The overall growth of industrial production was mostly impacted by the increase in manufacturing in the food industry, in refineries and in machinery industry. The rest of the sectors reported a decrease, with the most significant drop was reported in the manufacturing of consumer electronic products, according to Koršňák.

Also the automotive industry reported a monthly drop by 0.3 percent, which means that the production in two of the most important export sectors of the Slovak economy decreased in April. The other export fields, though falling in monthly terms, kept their annual rise in production, the analyst added.

“We expect that the industry will keep its increasing trend also in following months,” Koršňák wrote in the memo. “This should be supported mostly by the growing demand on international markets.”

Among other positive factors is the loose monetary policy in the eurozone and other countries not using the euro, the weaker common European currency, and relatively cheaper energies which should positively impact the consumer and investment demand in European economies, he added.