AFTER five years Bratislava will not host Rainbow Pride, with its organisers citing the bad mood among Slovak society annoyed by the “nonsensical campaign before the February referendum” which touched on issues of family, its protection, homosexual marriages, children adoption and sexual education at schools. 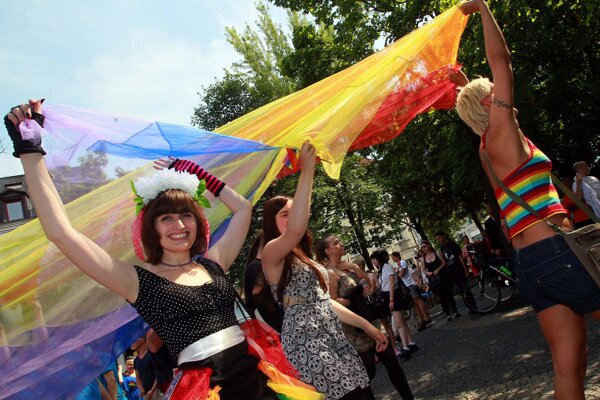 The decision comes at a time the representatives of the lesbian, gay, bisexual, transgender and intersexual (LGBTI) community are introducing a new platform seeking the introduction of life partnership that would introduce the same rights for people living in cohabitation as married couples have.

“Slovakia needs to hear the life stories of LGBTI people, their parents, children, friends and colleagues,” reads the open letter sent to the media by the organising team of the Pride and NGOs Queer Leaders Forum, Initiative Inakosť and Nomantinels. “Thus, we are going to collect your stories, in collaboration with the Life Partnership platform, which we will then be able to bring to all people in Slovakia.”

The new platform has already been supported by 38 non-governmental organisations from various fields.

Within the first phase of the campaign the coordinators want to focus on collecting the real stories of same-sex couples which they plan to present in various forms. Initial stories have already been published on the website, Martin Macko, head of the Initiative Inakosť which coordinates the platform, told the press when presenting it. Moreover, they plan to address other couples and encourage them to share their stories.

“We expect that many couples will respond to it and will want to contribute,” Jana Jablonická-Zezulová of the Initiative Inakosť told The Slovak Spectator.

Moreover, they also want to address the heterosexual couples who do not want to get married, added activist Fedor Blaščák.

The new platform will also point to new phenomena in society, like an increasing number of people living in informal cohabitations and the growing number of children born outside marriage. The life partnership status should introduce the same rights and duties as in marriage, including the establishment of undivided ownership or tax reliefs.

Further steps will include organising discussions with the public and experts, but also lobbying, the coordinators specified.

Anton Chromík, spokesperson for the Alliance for Family (AZR) organisation supporting the traditional family and organiser of the failed February referendum on family, however, responded that NGOs have not persuaded people in the plebiscite.

“Only when this initiative collects 900,000 signatures we can start society-wide discussion as equal partners,” Chromík said, as quoted by the Postoy.sk website, referring to the turnout in the referendum.

Moreover, the organisers of the campaign admitted it is financed from abroad, namely the Open Society Foundation and from Norwegian Funds, he claimed. Slovaks can decide on their own and do not need “forced change from abroad from rich corporations or promotion of the interests to other countries”, he added.

Macko, however, responded that the campaign will be also financed from gifts and collections, which will also impact its extent.

“The success of any campaign depends mostly on people, whether they will join it or not,” he told The Slovak Spectator.

Macko also stressed that contrary to AZR, they want to be “absolutely transparent” about their financing. This may come as a response to the fact that AZR still has not said who financed its campaign before the February referendum. No law, however, obliges it to do so, and the request is not even mentioned in the amendment to the law on election campaign which will come into force on July 1, the Interior Ministry said.

“We will certainly publish the structure of our expenses in following months,” Anna Verešová of AZR told The Slovak Spectator.

Regarding the discussion over the rights of LGBTI people, Macko said it began many years ago, resulting from the specific problems of the same-sex couples and their families. The reason is that the state does not recognise such cohabitations, he added.

The situation has not changed even after the failed referendum, though several politicians, including Prime Minister Robert Fico, promised to solve the problems same-sex couples have to tackle.

However, Macko admits they have not seen any particular steps. The only thing that has changed is that the government adopted the nationwide human rights strategy which proposes to strengthen the rights of unmarried couples, but there is no date or specific way how to do it.

“We offer specific solutions how to do it,” Macko added.

When asked whether they plan to adopt some measures by the end of the current tenure, the Justice Ministry responded it needs to follow the programme statement which does not mention the implementation of registered or life partnerships.

“We, however, support the reasonable discussion about seeking the solutions how to practically simplify the life of people who live in another bond than marriage, regardless of their sexual orientation,” Justice Ministry spokesperson Alexandra Donevová told The Slovak Spectator.

During the previous five years, the Rainbow Pride in Bratislava has evolved from an initial demonstration of bravery and courage into an event helping to open the debate on creating equal rights for LGBTI people in Slovakia. Instead of marching the streets, there will be several other events and campaigns. The next edition of the Pride should take place in Bratislava in 2016.

There should, however, be the LGBTI event in Košice as there are only few similar activities in eastern Slovakia, the organiser of the Pride Rainbow Košice Róbert Furiel told the public-service Slovak Radio (SRo).