THE MEDIAEVAL castle of Hrušov, which has been repaired and renovated by volunteers for several years, has been robbed. Thieves took everything they could, including dishes, cutlery, and soft drinks for the volunteers. 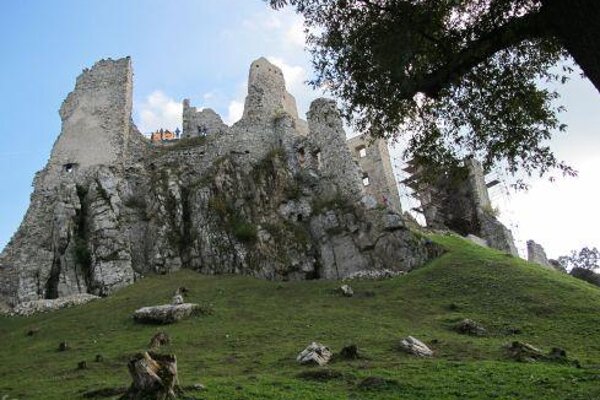 At the end of May, the volunteers one morning came to find their equipment, tools, devices – including weed whacker, concrete mixer, generator, wheelbarrow and smaller items like masonry tools, shovels, but also all dishes, cutlery, etc,” Stanislava Blahová of the Leustach civic association which organises the works told the Nitra regional newspaper of the Sme daily. They even stole the drinks meant for the people working there, she added.

She and her husband as teachers managed to inspire young people to come and help, but now they cannot continue, as they lack basic equipment.

“This is inhuman, that the association based on volunteering and resorting to support of donors is robbed of all technical and material means, which it has acquired so painfully and slowly, Blahová said, adding that it is a shame, and a mystery at the same time – because it is not easy “to pack a concrete mixer or a wheel-barrow into a pocket, or even a car”.

The damage is estimated at €3,500 and the case is being investigated by police.

The Hrušov Castle, a national cultural monument, was built at the end of 13th century, with the tower being added in the next century. For about 400 years, it thrived as a defence point controlling a crucial mountain road. After being robbed by imperial armies in 1708, it started dilapidating – which was only interrupted when Czechoslovak president Tomáš Garrigue Masaryk ordered it to be repaired in the beginning 20th century.

Since then, it remained unused and unrepaired until recently, volunteers began trying to return it to its former glory.