“SO I stayed there those two hours alone, without my baby, without my husband, two hours I was lying there on my own, incredibly thirsty, terribly pained, full of negative emotions about what I’d allowed to happen, [...] it wasn’t supposed to be like this.” 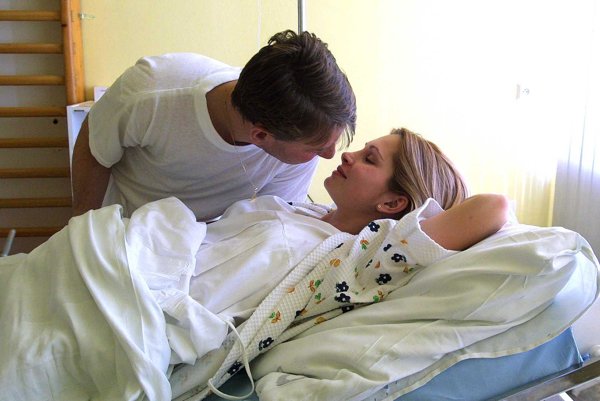 This is how a woman describes the immediate moments after she gave birth to her child in one of the Slovak hospitals in an interview which was part of the monitoring by human rights watchdog Citizen, Democracy, Accountability (ODZ) and Women’s Circles. The findings of their two-year-long monitoring were published in late April 2015 and show that even though most Slovak hospitals now label themselves baby-friendly and have introduced practices that were unheard of some years ago, from the perspective of human rights, most deliveries in Slovakia are well below standards observed in advanced democracies.

On one hand, a woman can now be accompanied by the child’s father or another person of her choice all through labour and can opt-out of some medical practices. On the other hand, there are many cases when medical intervention is performed during labour and birth without the informed consent of the labouring woman, and many hospitals are unable to secure sufficient privacy for mothers and their babies in the intimate moments of birth, the monitoring authors suggest.

Mothers and their rights

The researchers interviewed 15 women who in the past three years gave birth to their babies in one of the hospitals in Bratislava and Trnava Regions and found that throughout the entire birthing process, violations occurred in respect to the women’s right to information, to informed consent, to refuse a proposed procedure, and to have their personal choice respected.

In many maternity wards, women in labour cannot feel safe, they cannot rely on the staff to secure privacy during the intimate moment of childbirth, and they are not sure their wishes will be fulfilled or even heard,according to the report.

In addition, during all stages of labour (and after birth as well), the women suffered from a lack of information regarding obstetric procedures, the entire birthing process, and their own and their newborn’s health conditions.

Some claim to have suffered pain as the medical staff did not make sure about the proper use of anaesthetics when sewing their perineum wounds.

The vast majority of Slovak women give birth to their children in hospitals. Home birth is an option that only exists in a grey area not covered by legislation (and thus the woman who gives birth to her child at home does not have the necessary medical care guaranteed in case of need), and other facilities simply do not exist. 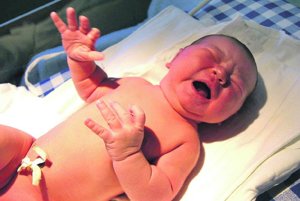 The lax approach to the human rights in maternity wards is for the most part the legacy of the communist regime “and the ubiquity of totality in the maternity wards”, said Janka Debréceniová, one of the authors of the monitoring, in an interview with The Slovak Spectator. Since hospitals are the only places where the state guarantees health care to women in labour, this creates conditions where women are in the power of health-care facilities.

“Once they get in, the institutions are hard to penetrate from outside, and public control is very difficult,” Debrecéniová added.

Before 1989, the focus was on the safety of the mother in labour and her child, and the delivery room was turned into a workplace with intensive care and monitoring, said Jozef Záhumenský, head of the gynaecological and obstetric clinic of the Faculty Hospital in Trnava. In result, Slovakia and the Czech Republic had been high in the rankings of quality of obstetric care, with relatively low financial inputs. All women have fully paid and accessible prenatal care, including all screenings.

“The comfort and privacy of the women in labour have been slightly forgotten in the process,” Záhumenský told The Slovak Spectator.

In this respect, Slovakia lags behind some western countries, such as the UK, where movements that have pointed out inappropriate methods used in childbirth have been active since the 1970s, Debrecéniová noted.

“When we look at birth care in some western European countries, in Canada, Australia, and elsewhere, we see that many of the things that we are pointing out now have already been tackled there,” Debrecéniová said. “And it is no coincidence that the places that have tackled these, are countries with well-established democracies.” 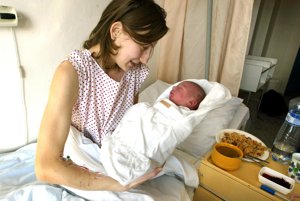 The Health Ministry considers the claims about violations of the rights of women in labour too strong and maintains that it is inappropriate to generalise the findings among all hospitals. Health-care providers are obliged to observe the valid legislation, ministry spokesperson Peter Bubla told The Slovak Spectator.

“If the patient feels she was provided insufficient care, they can turn to the Health-Care Surveillance Authority,” he said, adding that violations of human rights are a subject for criminal prosecution.

The authors of the monitoring, however, argue that they have grounds for generalisation, since as part of their research they sent letters in the name of mothers-to-be to all maternity wards in Slovakia containing birth-related wishes of the senders. Through the letter they aimed to find out about the conditions of labour and birth in the facilities.

While most hospitals did not respond to the letter at all, some directly admitted violations of human rights, such as not giving the woman in labour the freedom to choose her birthing position, which interferes with the right to privacy, Debrecéniová said. The monitoring team also used other tools to find out about the maternity wards’ practices, such as the Free Access to Information Act, Debrecéniová added.

Other breaches to the right to privacy that the research authors detected included the direction of birthing chairs towards the door of the room, several women giving birth in one room, or hospital staff entering the room without knocking on the door or introducing themselves to the mothers in labour.

Generally, the authors of the monitoring described the communication by the medical personnel as insufficient.

The Health Ministry admits that the failure to communicate tends to lead to most problems that occur in healthcare, with statistics saying that over 70 percent of the motions filed with the surveillance authority concern failed communication rather than failed care. Bubla claims that the ministry is focusing on this problem and encourages the hospitals to hire mediators who can help patients solve communication issues with hospital staff.

The report noted that it was a common complaint of women who gave birth to their children in Slovak hospitals that they lacked information about what was happening with them, and about their condition as well as the condition of their children. The women described some of the operations, such as incision of perineum, being performed on them without their actual consent.

The authors claim that hospital staff have disregarded informed consent by the mothers and deem this one of the major problem of maternity wards in Slovakia.

“The hospital staff, instead of communicating with the woman, let her sign the form when she arrives to the hospital, she is in contractions, and this is a moment when it is hard to negotiate about anything,” Debrecéniová told The Slovak Spectator, labelling this formal approach to informed consent very unfortunate. She noted that the women do not have to sign the form if they do not want to, but admits that this hardly ever happens because “it is  hard to stand up against the system in such a moment”.  Debrecéniová advises that women sign the consent with the note that is only valid with their birth plan, which they should bring with themselves or send to the hospital in advance by registered mail.

According to Záhumenský, both facilities that he worked for, first a private maternity ward and now a teaching clinic used the informed consent forms.

“Labour is a natural process which cannot be disagreed with, and a written informed consent is neither necessary nor required,” Záhumenský said, adding, however, that both facilities that he worked for in Slovakia, first a private maternity ward and now a teaching clinic, had forms for informed consent.

“Under normal circumstances there is no interference with the birthing process and all interventions performed are acute and unplanned, and therefore do not require an informed consent,” he said, adding that in such cases verbal information and consent are sufficient.

“In my experience we receive that from the mother in labour,” he said, noting that he has never received any complaints from his patients.

The survey among women shows that the most frequently occurring practices that are performed without, or in some cases even against the informed consent of the woman, are the incision of the perineum (episiotomy) and the Kristeller expression (the obstetrician pressing on the abdomen during the final stage of labour). Both these are still routine practices in Slovak hospitals, although in western countries they are used much less and their benefits for labour and birth have not been proved in any way. The authors of the monitoring criticise this as inappropriate.

The pressure on the abdomen not only increases the discomfort of the woman in labour, but it also cannot be ruled out that it might damage the uterus, perineum, and even be dangerous for the baby, the research publication cited the WHO.

While all the hospitals addressed by the authors of the research claimed they weren’t using this questionable practice, the interviews with women who gave birth in those hospitals have shown that almost all of them had an experience with some sort of pressure on their abdomen during the final stage of labour.

“Pressure on abdomen is a controversial operation, which in some situations might be an alternative to a forceps birth,” Záhumenský said. And while he admitted that it is a known fact that this operation is overused in Slovak hospitals, on the other hand, there are much less forceps births than abroad.

While episiotomy and pressure on abdomen are often criticised, Záhumensky does not perceive them as the main problem of obstetrics in Slovakia.

“It’s a pity that money is wasted on such research projects that solve nothing,” he said and noted that he would much rather welcome a well-organised and targeted campaign of NGOs against the non-indicated C-section births.

The increase in the number of C-sections is among the alarming factors according to the evaluation of maternity wards by the Health Policy Institute non-governmental think tank. In  2013 it reported that almost 30 percent of all births are performed with a C-section, with the  World Health Organization (WHO) recommended rate being 15 percent.

“Our country unfortunately is one with the steepest increase in C-sections in Europe,” Záhumenský noted, saying that more and more women demand sections and the physicians, worried about potential complaints, perform non-indicated surgeries “with all the negative consequences for the mother and the child”.

Waiting for a strategy

The Health Ministry will respond to the various issues surrounding maternity and reproductive health in the national programme of care for women, which according to Bubla is in preparation.

Such an all-encompassing programme, however, is not a novelty in the ministry’s plans. The ministry has been trying to formulate and pass it for years now, originally as the national programme of the protection of sexual and reproductive health, at least since 2007, but it has repeatedly met with resistance among the non-governmental sphere, particularly some pro-life organisations that have opposed, for instance, the use of some contraceptives.

The ministry is now trying to introduce the programme again, but NGOs opine it is unlikely to tackle this controversial issue in an election year.