Fico: Slovakia to fund Eastring and government city from EFSI

Slovakia would like to finance the construction of the Eastring gas pipeline and a so-called government city project from the European Fund for Strategic Investments (EFSI), said Slovak Prime Minister Robert Fico after meeting European Commission Vice-president Jyrki Katainen in Bratislava on June 15. 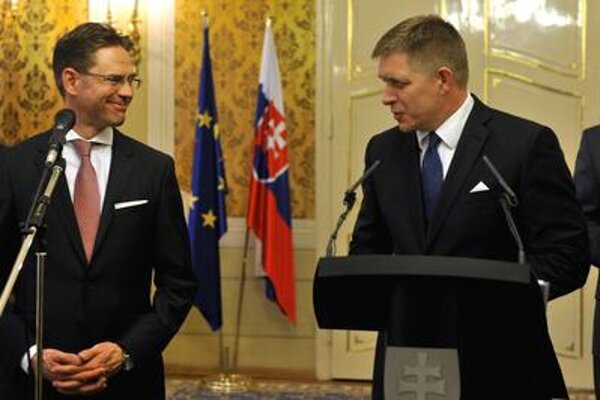 Slovakia will contribute €400 million towards Commission President Jean Claude Junker’s investment package. Fico noted that the crisis in recent years has reduced the volume of investments in Europe by 15 percent when compared to 2006 and 2007.

According to Fico, the EFSI’s aim is to mobilise all possible investments, including private ones, with the aim of increasing the share of investments in central Europe, thereby stimulating economic growth, combating unemployment and creating new jobs.

“Slovakia is now among seven EU-member countries that have decided to contribute towards creating this fund," said Fico, adding that the €400-million contribution will be made via Slovak Investment Holding.

The Slovak government wants to create a good ‘reservoir’ of projects. These should not compete with the standard market environment, but should serve for spheres that would have much difficulty in obtaining funds. At the same time these projects must be viable.

The Slovak project reservoir now includes the construction of the Eastring natural gas pipeline which should serve as a substitute solution if Russia halts gas transit through Ukraine, and the creation of a ‘government city’ that should make the running of ministries more efficient.

Slovakia further proposed to the Commission that it would serve as a mediator in coordinating various financial mechanisms aimed at boosting investments. For example, China has offered countries from central and eastern Europe a credit framework of $10 billion.

Katainen believes that Slovakia will be able to draw benefits from the new fund, as its economic indicators are very favourable.

“Public finances are in an excellent condition, and this is a precondition for trust in a state and is also necessary for attracting public investments,” said Katainen, adding that the investments will go mainly to large infrastructure projects and small and medium-sized companies.