Some 100,000 people pulled savings out of private pension pillar

SOME 100,000 people have pulled their money out of the second, private pillar of the old-age pension scheme using a temporary three-month gap to transfer savings into the public pay-as-you-go pillar. 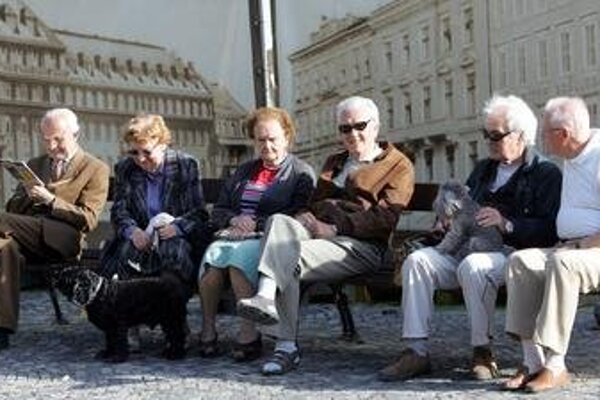 The Labour Ministry expressed satisfaction that such a high number of people responded to its warning that the second pillar is not advantageous for all the savers while the opposition perceives the numbers in a positive light too as about 1.4 million savers remained in the second pillar.

“The second pillar is beneficial for those who can save in it for at least 25 years and whose wage exceeds the national average,” said Labour Minister Ján Richter as cited by the TASR newswire. “It’s the responsibility of every individual saver as to how they’ve considered the benefits of remaining in the second pillar. I respect their decisions.”

Assets of savers in the second pension pillar exceeded €6.38 billion as of June 12, a decrease from €6.58 billion on March 6, according to the Association of Pension Fund Management Companies.

The money of people who have decided to withdraw from the second pillar will be transferred back to Sociálna Poisťovňa. The first, pay-as-you-go pillar of Sociálna Poisťovňa is running a deficit of about €1 billion in the long term and the gap is being covered from other sources including the state budget.

“It’s logical that the more savers there are in the second pillar, the higher the need to cover the deficit,” said Richter. “But later it will become advantageous for the state ... as savers will be leaving the second pillar with saved resources, provided that they have invested well.”

The government originally estimated that 85,000 savers would leave the second pillar and took with them about €312 million to the first pillar.

The opposition criticises the Fico government for destabilising of the pension scheme when it repeatedly opens the second pillar. This was already the fourth time it has been opened to allow savers to withdraw money.

“Current demographic developments and warnings from international institutions are sufficient evidence that the pay-as-you-go pension system is unsustainable,” Pavol Frešo, the chairman of the Slovak Democratic and Christian Union (SDKÚ) said as cited by TASR. “There will be a shortage of economically active people working to cover the retirement benefits of pensioners. Robert Fico has not unveiled yet a sustainable pension system. All of his measures will only translate into a disproportionate rise in the retirement age and a rapid increase in levies.”

It should last Sociálna Poisťovňa some time to collect complex information about those who left the second pillar but it is expected that these were especially people too close to their retirement age or with low incomes.

According to pension fund management companies, young people and people with over the average earnings benefit most from saving in the second pillar.

“It is not good that future pensioners would depend only on income from the first pillar, whose sustainability is seriously endangered by demographic developments,” Jozef Paška, chairman of the board of directors of Allianz – Slovenská Dochodková Správcovská Spoločnosť pension fund management company told the Pravda daily. He recalled that while today on average 1.6 economically active persons pay levies per pensioner, but this based on predictions this will decrease to only 0.74 person per retiree by 2060.

Sociálna Poisťovňa has sent two letters to savers in the second pillar with information for whom saving in the second pillar is advantageous and for whom not. Pension fund management companies and several experts perceived Sociálna Poisťovňa’s information in the two letters as misleading and insufficient. They, for example, pointed out to underrating the influence of the expected negative demographic development in Slovakia, putting bigger stress on the growth of the labour productivity and the volume of wages paid.

The number of pensioners in Slovakia increased by almost 135,000 over the last 10 years to be at almost 1.35 million at the end of May, based on data from Sociálna Poisťovňa. These figures included old-age pensioners, early retirees and those on disability pensions. Old-age pensioners have increased by 100,500 to more than 1.01 million over the last 10 years and the number receiving disability pensions rose by 52,100 to nearly 234,500.

Analysts warn that unfavourable demographic developments pose a significant threat for the sustainability of the state pension scheme.

Based on prognoses made by Eurostat, the number of Slovak citizens will shrink by 800,000 people over the next 45 years, meaning that the population would decrease from 5.4 million now to 4.6 million in 2060.

According to Zdenko Štefanides, chief economist with the VÚB bank, as a consequence of the ageing population, the number of people in the productive age group (age 15 to 64) will decrease by more than 1.4 million and Slovakia will have the highest share of citizens over 65 years compared to those in the productive age group within the European Union.

“It may please us that we will live longer but we will also work longer simply because there will be nobody to replace us,” Štefanides said. “There will be not enough workers who would pay for the pensions of future retirees and thus we will need to save for our old age needs ourselves. A similar problem will also occur in health care, especially in long-term care. While the number of older patients will increase, there will be less money coming from health-care levies.”

Radovan Ďurana, analyst with the Institute for Economic and Social Studies (INESS), said that the first pillar is already in deficit when levies paid by those working are not sufficient to cover pensions paid out. The gap is covered from other resources and Ďurana expects that currently working people will not receive pensions as high during their retirement as they are now. The average monthly pension in Slovakia was €408.40 at the end of May while the average monthly wage was €839 during the first quarter of 2015, based on Statistics Office data.

Fico’s government has already responded to the demographic prospects and increased the retirement age and at the beginning of 2017 the retirement age for both genders will automatically be increased each year in relation to higher life expectancy, meaning that as people live longer the retirement age will go up. It also curbed the valorisation mechanism for current pensioners, increased the maximum assessment base for calculation of old-age pension contributions by those working, and strengthened intergenerational solidarity.

According to the Labour Ministry, the development of the pension scheme is not only influenced by the demographic development but the future growth of the economy, labour productivity or development of unemployment play a significant role too.

Economists expect that the deficit of the first pillar, even though that the second pillar would bring some relief, will increase in the long term. The deficit in the first pillar is budgeted at €1.263 billion for 2015 while it is covered from the reserve fund of solidarity and surplus operation of other funds of Sociálna Poisťovňa. The deficit for 2016 is planned to be almost €1.3 billion.

According to the Labour Ministry there are no reasons to frighten the public and some dramatic changes.

“Thanks to carried reforms in the whole pension system Slovakia will be not burdened higher pension-related expenditures during next 25 years,” Michal Stuška, spokesman of the Labour Ministry said in response to the prediction of the European Commission as cited by TASR.

According to the Labour Ministry, the development of the pension scheme is not only influenced by the demographic development but the future growth of the economy, labour productivity or development of unemployment play a significant role too.

During its 10 years, the second pillar has already be reopened four times and frequent changes in the pension scheme remain being criticised. President Andrej Kiska in his speech assessing the state of the country delivered on June 18 recalled that the form of the old-age pension scheme will take in the future has been disputed for more than a decade. According to him, it is high time legislators agree upon a definitive shape of the scheme. Pension fund management companies agree and call for systemic changes.

“It’s important that changes are solved in a systemic way and on an expert basis, not politically,” said Stanislav Žofčák, the head of the Association of Pension Funds Management Companies (ADSS) as cited by TASR. “In the moment when the pension scheme would set like this, it is necessary to fix it. Thus a constitutional law for its protection is inevitable.”