A PUBLIC protest against the resettlement of migrants in Slovakia took place in Bratislava on June 20, shutting down traffic on the central Hodžovo Square, the main railway station and SNP Square and keeping dozens of police officers busy. 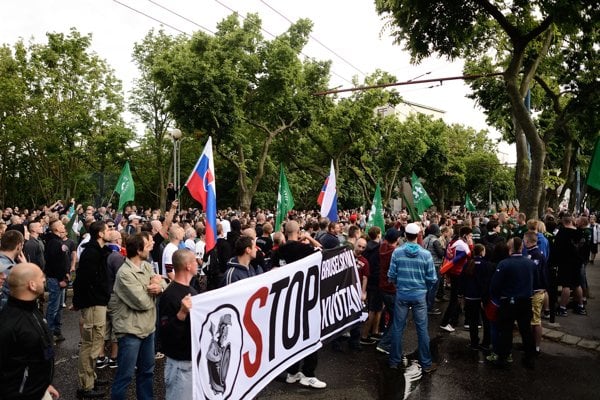 Thousands of protesters, chanting “This is our home” and “Treason!”, set out from the main railway station shortly after 15:00 towards the SNP Square.

A critical situation occurred close to the Presidential Palace, when the protesters ran into a group of hundreds of people who had assembled for a counter demonstration called “Together against Hate - Bratislava Blocks”. The groups came to a distance of some 20 metres from each other and exchanged profanities and obscene gestures. The police managed to keep the two groups separate, although a few cans, plastic bottles and even a smoke bomb were hurled at the smaller group. 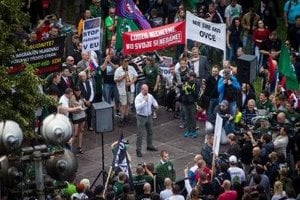 A number of speakers addressed the crowd on SNP Square. The protest organisers claimed that the purpose of the event was not to spread religious and racial hatred. “Let me wish you a beautiful and nice white day,” Marian Kotleba, the extreme right governor of Banská Bystrica region told the crowd.

Many speakers called the Slovak MEPs who voted for the migration quotas “traitors”. “Hang them! Hang them!” the crowd chanted. The speakers blamed the United States in particular for the influx of refugees to Europe because of Washington’s bombing of Libya and Syria, although criticism was also heaped on Israel, Prime Minister Robert Fico, capitalism and high unemployment. The situation was monitored by the police, with security checks confiscating cold weapons and dummy explosives from some protesters, who were also arrested. 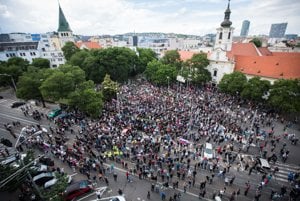 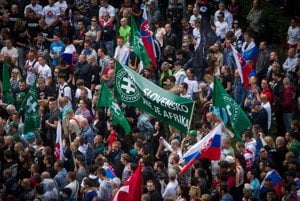 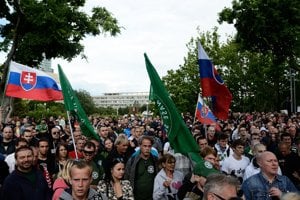 On that day, police detained about 25 people: the protest and hooliganism did not end as the main event dispersed. The police were first summoned to take action against a group of approximately 300 people who interrupted a cycling race close to Bratislava Castle, committing vandalism and assault. Another 25 people were detained on Staromestská Street where rioters damaged six police vehicles.

“Shortly before 18:00, an assault against a police officer took place. He was hit in the thigh by a paving stone,” said police spokeswoman Tatiana Kurucová, as quoted by the TASR newswire.

Two police officers were also attacked (with tear gas) during a protest march against the Islamisation of Europe. “A 28-year-old Bratislava local was brought to a police station on suspicion of attacking a public official,” Kurucová said. 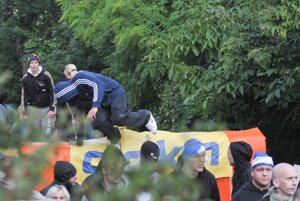 The protest against refugee quotas in Bratislava showed that extremists are able to unite and after merging into one party they might be successful for the first time in parliamentary elections; as the topic of migrants plays into their hands,  director of the Centre for Research of Ethnicity and Culture Elena Gallová Kriglerová said, as quoted by the Sme daily. She points out that now when they managed to unite it is realistic, unfortunately, to expect that they might make it to parliament.

The organiser of the protest, Lukáš Kopáč, has admitted the ambition to ally for next year’s elections with the People’s Party Our Slovakia led by Marian Kotleba.

The protesters attacked a Muslim family at the Bratislava Main Station, Sme wrote. The usually quite tolerant police have detained 140 people while five of them have been charged the next day, according to Sme. Interior Minister Robert Kaliňák said he was satisfied with how the police managed the protest.

The police arrested 25 individuals with respect to the cycling race incident and a total of 140 in the wake of Saturday protests. Six police vehicles were damaged and three police officers injured.

Most of those detained are of Czech citizenship, the TASR newswire wrote, citing Kaliňák in the Sunday political talk show  O 5 minút 12 / Five Minutes to Twelve on the public RTVS TV channel.