Parading fascists and indulgent PM beg question: who here is “out of touch with reality”? 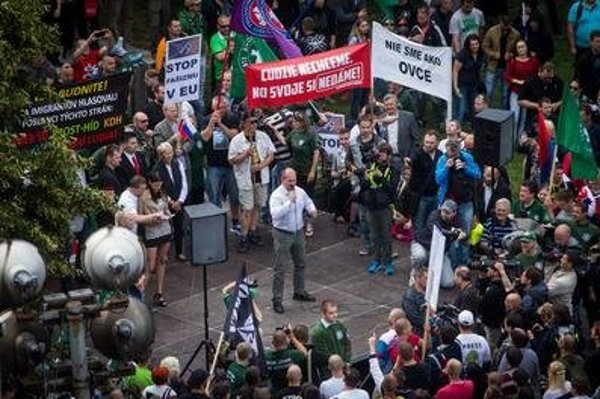 I’ve never really understood Slovakia, even though I’ve lived here half my life. I’ve watched the country defeat Mečiar, join Europe, become a place where our kids might choose to stay. Not because they couldn’t leave, but because our best impulses were starting to overcome our worst. My sme tu doma / This is our home – the heart assented. A chant one heard at sports events, after a rocky two decades of independence; it seemed a stirring expression of emerging pride. 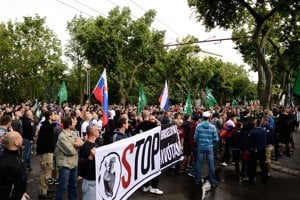 But how easily, as Kotleba’s passionate rabble reminded us on Saturday, that chant can become a source of shame. Because this is their home too – those who guard Fortress Slovakia with shifty eyes, attacking immigrants and wishing each other “a fine white day”. While the country’s prime minister wags an avuncular finger at the thugs for “breaking down open doors”, reminds them that his government rejects migrant quotas, and counsels them “not to get riled up” by Slovakia’s European Parliament delegates, who support migrants: “almost everyone in Brussels is out of touch with reality.”

Maybe the time has come to ask – what is the Slovak reality, in the summer of 2015? Are Slovaks a generous nation, as we so often claim? Or does our generosity extend only to guests whose skin is white, and who can be counted on to go home when the weekend is over? Does being part of the European Union mean sometimes sharing an onerous burden, such as finding a home for refugees from Africa and the Middle East? Or does membership consist solely in accepting billions in EU funds from Brussels and being allowed to live and work abroad? Is Slovakia still a Christian country? Does faith not command us to take pity on the weak and persecuted? To pray for migrants, as the hymn goes: O hear us when we cry to thee / for those in peril on the sea? Or has bitterness and envy so consumed our hearts that it has exhausted our charity?

But enough hand-wringing. As the parading fascists remind us, migration is one of those visceral, pre-intellectual issues that is impervious to reason. No matter that 800 souls cannot threaten the culture or religion of five million; no matter that terrorists can probably find easier ways to infiltrate Slovakia than by leaky dinghy from Libya; no matter that if we can afford to spend €4.5 billion on a tunnel under the Small Carpathians, we can probably afford to help a few hundred Africans resurrect their lives. No matter. Let the skinheads march, let Fico scowl – and let the rest of us get on with the unfinished job of making this country a place where bigots, rather than refugees, feel unwelcome.