WHEN young painter Janko Alexy wandered around Slovakia at the beginning of the 20th century, he still images that reflected the previous century. Alexy was fascinated mainly by villages located outside urban centres in which most constructions were still built from wood. 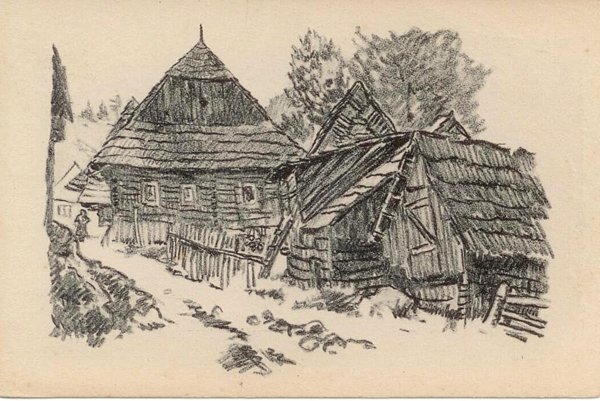 No wonder that the painter visited also the village of Nižná Boca, set high up in the mountains.

In Boca, people have long made their living from mining; but also by cattle and sheep breeding. What makes this Low Tatras village unique is the fact that cowsheds were not placed in backyards, but in the meadows. This is probably the only example from Slovakia when farmers had their livestock – but also feed for them – far from their homes. Paradoxically, despite huge spaces surrounding Boca, the town itself was so narrow that no farm buildings would fit into its streets.

The meadows and pastures of Boca spread far and wide, and many sheds were two or three kilometres away from the homes of their owners. Farmers had to make the walk several times a day, and often it was the women who did so. Men worked in mines, in the woods, at the plant producing frames in Malužiná, or abroad; and thus, women had to tend the household and the farm. They had to be really fit as they not only made the distance several times a day, but they returned from the sheds with vessels full of milk –which was then processed at home into butter, curd and cream. The products were sold in the nearest town, Liptovský Mikuláš.

Women of Boca really did not a fitness centre. Apart from endurance, they had to have also physical strength: hay was first raked and collected, then bound into huge bundles which they then carried up steep ladders to the high gable walls of the sheds. It is remarkable how people in these harsh mountain conditions took care also of their vast pastures: they were always neatly scythed, molehills levelled and stones picked.

This postcard of Nižná Boca was published some time around 1920 and is part of a more numerous series of postcards that remind of Alexy’s memorable trip around Slovakia.