Ukraine complains to EU over Eustream

SLOVAKIA enabled a so-called small reverse flow of natural gas east to Ukraine last September, but more recently Ukraine has turned to the European Union with a complaint that Slovakia refuses to use the spare capacity in a larger pipeline. 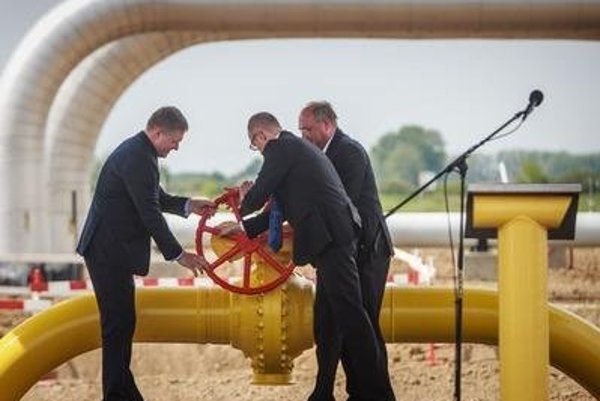 Ukraine has appealed to the European Union over an agreement between Slovak pipeline operator Eustream and Russia’s Gazprom that it says violates EU law in allowing Gazprom to prevent reverse flows back to Ukraine in a key pipeline, Reuters reported on June 23. The Slovak Economy Ministry reacted with surprise while energy analysts say it represents attempts by the Ukrainian state gas company Naftogaz to boost its business.

Economy Ministry spokeswoman Miriam Žiaková told public broadcaster RTVS that the ministry finds the complaint unjustified and that Eustream is acting fully in line with the legal directives including those of the EU.

Ukraine, seeking energy independence from Russia, has repeatedly asked Slovakia to allow reverse flows through one of four main pipelines at the Uzhgorod-Veľké Kapušany gas transit points on the Ukraine-Slovak border. Eustream has declined, citing the agreement with Russian supplier Gazprom’s export arm and enabling the reverse gas flow via a smaller Vojany-Uzhgorod pipeline.

“As a result, Ukrainian and European energy companies are not able to use this gas connector ... This legacy contract between Eustream and Gazprom Export is in direct violation of EU law,” Prime Minister Arseniy Yatsenyuk said in a letter addressed to EU Presidents as reported by Reuters.

Yatsenyuk further wrote that full Slovak reverse flow would allow Ukraine to end its dependency on Gazprom and eventually import all of its gas from the EU.

The appeal from Ukraine follows publication of a two-year EU investigation in April that accused Gazprom of abusing its dominant position in Poland, Hungary and six other countries in eastern Europe by building “artificial barriers” to obstruct gas flows, Reuters reported.

Eustream in its response wrote that it recognizes the Ukrainian aim to achieve a fully standardised operation on its borders.

Eustream is ready to participate in such negotiations and support the Ukrainian party in a maximum possible way. At the same time Eustream must take into account its responsibility to ensure gas transmission to many countries of European Union, Chuguryan said.

“In this respect, we must articulate that the Ukrainian complaints in connection to Eustream’s transmission contracts with the Russian supplier are irrelevant,” wrote Chuguryan. “The operation of the measurement station in Veľké Kapušany is not governed by the above mentioned contract but by separate agreements on technical conditions of transmission. These agreements do not form part of the transmission agreement.”

“Eustream’s utmost interest lies in finding a constructive solution,” wrote Chuguryan, adding that in any of its actions, Eustream thoroughly follows the principles of European law and its mission, which is the safe and reliable transmission of natural gas.

“It is peculiar that a non-member country of the EU, that has not started yet to meet its obligations from the association agreement, is going to preach at one of the EU members and also the European Commission about what is or what is not in line with the European legislation,” energy analyst Karel Hirman told the Sme daily, recalling that Ukraine itself claims that it has saved almost USD3 billion thanks to the reverse gas flow via Slovakia.

Alexander Duleba of the Slovak Foreign Policy Association recalled that thanks to the reverse gas flow from Slovakia, Ukraine survived the winter.

“Naftogas, Ukrainian gas supplier, wants to extend its portfolio and its needs a free access to the key pipeline in Veľké Kapušany,” Duleba told Sme.

“Attacks on Slovakia are counterproductive and will not solve the basic problem of Ukraine: to have its transit under contract and to create standard conditions advantageous for gas traders from the EU but also for Gazprom,” Hirman told the Denník N.

Opening up so-called reverse gas flows eastward was part of the EU’s response to Gazprom’s decision to cut supplies to Kiev in 2014 due to a row over pricing and following Moscow’s annexation of Crimea.

High Representative of the European Union Klaus-Dieter Borchardt together with Slovak Prime Minister Robert Fico and Yatsenyuk ceremonially turned on the valve of the Vojany-Uzhgorod pipeline in September 2014.

“The introduction of the reverse gas flow from Vojany to Uzhgorod is an important event both in Slovak-Ukrainian relations and in the European context,” said Fico, as cited by the TASR newswire. “The solution of the reserve flow was the best possible solution from the technical, time, as well as legal point of view.”

The capacity of the Slovak pipeline, a modernised older link from the western Ukrainian town of Uzhgorod built to supply the Vojany power station near the Ukrainian border, is 14.5 billion cubic metres per year.

The possibility of a reverse flow from Slovakia to Ukraine was discussed for more than a year. Slovakia advocated the option of using the 700-millimetre-diameter pipeline, built to supply the Vojany power plant with gas from Ukraine, to secure the reverse flow so as not to violate existing contracts. Ukrainian officials instead had hoped to utilise the spare capacity of pipelines operated by Eustream going through Veľké Kapušany.