AFTER several premieres by famous or locally popular composers, the Slovak National Theatre (SND) is introducing, for the first time in Slovakia, the opera Jewels of Madonna (I Gioielli di Madonna) by the German-Italian composer Ermanno Wolf-Ferrari. 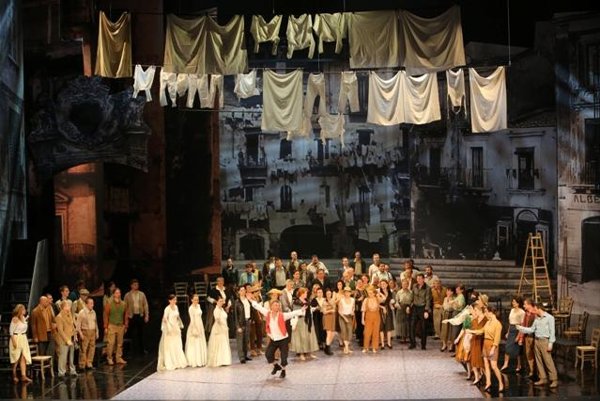 Musical manger of the SND’s opera section, Austrian Friedrich Haider, is a big fan of Wolf-Ferrari and thus, this selection is a logical step. The Bratislava-based theatre is the only one in wider area set to stage this opera.

Although a work by slightly forgotten composer, this three-act post-romantic veristic opera is very demanding from various points of view. The show has the distinction of put the most people at the same time onstage in the history of the new SND building, as apart from a soloist, also the Bratislava Boys’ Choir and Pressburg Singers help out as guests.

It is also very demanding from the musical point of view, for the orchestra as well as for the singers.

“My Maliella is free as the wind, very individualistic but also very naïve,” Natalia Ushakova (Russian-origin soprano who already performed in SND’s Eugen Onegin as Tatiana), said about one of the main characters. She described the demanding role as “Santuzza with Tosca, Carmen, Mařenka of the Bartered Bride and Viola in one person” and said the singing is difficult.

“It is also not easy to make the love scenes credibly,” Ushakova laughed, “when you have to kiss Kyungho Kim as Gennaro, or Daniel Čapkovič (as local Camorra boss Rafaele), to watch the conductor’s instructions and to start singing at the right moment.”

Čapkovič added that the most difficult part was the kissing – or making love – through bars which divide the potential lovers.

The opera originally staged just before World War I but in the Bratislava edition, the setting is less clear and more general. The story takes place in Naples, the hometown of the costume designer, Concetta Nappi.

She described, together with stage designer, the efforts to evoke the vivid southern-Italian city of Naples in its untamable pulse, while accounting for the deep faith and superstitions that are in the bones of the locals, with the use of flaring colours and noise in the beginning to grey, darkish colours and dampened inner grief in the tragic climax of the opera. 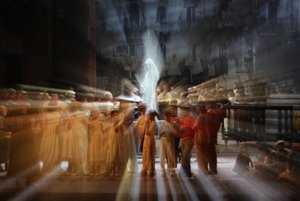 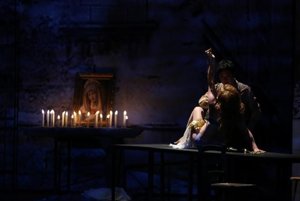 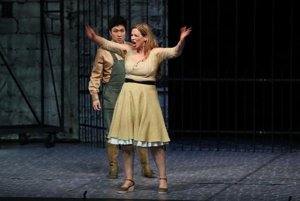 “We have to show thousands colours of Naples,” Haider explained, “but also to take out and stress the one colour, the story of Gennaro, Maliella and Rafaele. Their story does not have a happy ending, but in the end, the motif from the beginning that sounds in the end evokes the start of a new hope, a new story.”

The Jewels of Madonna premiered at the end of May, and will run on June 27 and then in the 2015-2016 opera season. More information can be found at www.snd.sk.