THERE will be no obligatory immigration quotas and EU member countries will accept refugees on a voluntary basis. 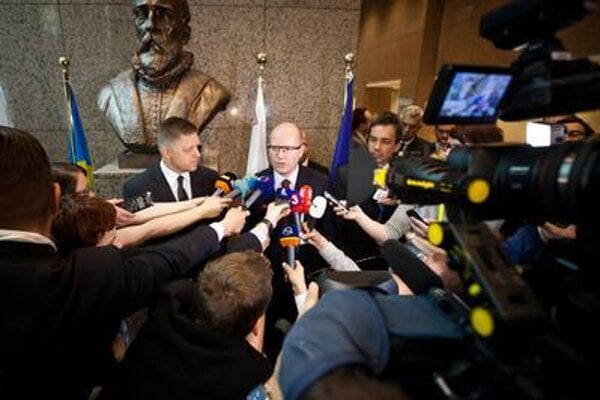 The plan for quotas failed due to a lack of consensus across the EU’s 28 member states.

Slovak Prime Minister Robert Fico announced that the issue of obligatory immigration quotas has been dropped after the European Council meeting on June 25. The plan of mandatory quotas proposed by the European Commission indicated that Slovakia should have accepted some 785 refugees.

“We’ve adopted decisions that allow EU-member states to take a voluntary approach towards the migration issue,” said Fico as cited by the TASR newswire, adding that the Visegrad Four grouping has proudly resisted the Commission’s pressure and has achieved what it wanted. “Nobody will order Slovakia how many and what kind of migrants it should accept. We’ll lead a dialogue with the European Commission on a voluntary basis, and we’ll present Slovakia’s contribution. It will be our free decision, not a dictation, which didn’t have any support in Slovakia, either from the public, or parliament.”

Fico thanked his Czech counterpart Bohuslav Sobotka for taking part in what the Slovak prime minister described as a difficult and stormy debate.

Sobotka stated that the V4 has managed to defend its unity and the principles that it agreed on when it comes to this issue.

“We went to the edge of what could have been pushed through on Thursday without taking the talks to shipwreck,” said Sobotka. “We’ve managed to push through into the final resolution a clear reference to a voluntary element and the principle of consensus.

Based on information from an unnamed diplomatic source, Fico has played a significant role in nixing a European Commission-led initiative to impose migrant quotas for EU countries at the latest European Council session in Brussels.

“It’s hard to ascertain which of the statesmen was the most emphatic in their statements, but the Slovak prime minister definitely put up the most vocal opposition to mandatory quotas on the resettlement of refugees,” said the source, who is close to European Council President Donald Tusk, as cited by TASR.

Fico reportedly said several times during the talks on the night of June 25 that he wouldn’t leave the meeting unless a deal on the voluntary relocation of asylum seekers was struck. The Slovak delegation cited, among other elements, the conclusions from an EU summit in April in which a clause concerning a voluntary principle was included.

According to the source, Fico also based his line of argumentation on the public outcry against the quotas in Slovakia as well as their rejection by the Slovak Parliament.

“He [Fico] put up the biggest fight I can recall on his part at any European Council session,” said the source. While all the Visegrad Four (Slovakia, the Czech Republic, Hungary and Poland) premiers came out against the quotas, Fico is said to have been the most “vocal” opponent.

Fico claimed that accepting migrants is only like a poor plaster that doesn’t cure the essence of the problem. He added that Slovakia will continue to negotiate with the Commission and will say how it’s able to help tackle the migration crisis.

As Fico said during the TV show ‘O 5 Minút 12’ on the public broadcaster RTVS, Slovakia will be able to complete a concrete proposal of the voluntary aid for migrants by the end of this week. The state wants to help refugees whose lives are in danger, but do not constitute a security risk.