TWO days before the start of a full-fledged strike announced for June 29, trade unions at the PSA Peugeot Citroën plant in Trnava reached a compromise agreement with the company’s management. 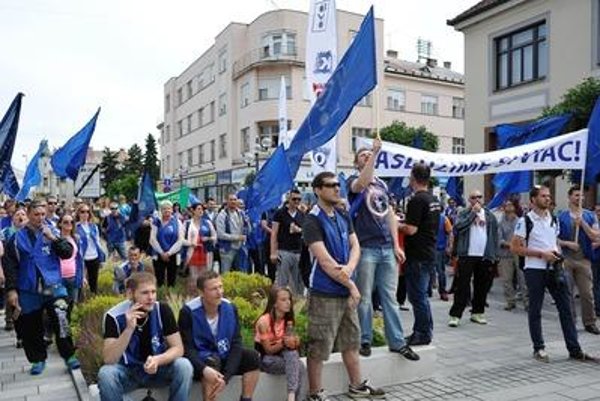 Based on the agreement, employees will receive a one-off benefit of €450 to be added to their July salaries, while their total monthly wages will increase by €30 as of 2016. They will also get a bonus of €75 every quarter based on the company’s results. In total this means €840 per employee, the TASR newswire wrote. The compromise agreement was announced by Rémi Girardon, general director of PSA Peugeot Citroën Slovakia, Emil Machyna, chairman of the trade unions KOVO and Milan Minárech, the head of trade unions at the carmaker.

Trade unionists perceive the results of bargaining as a good compromise.

“We are satisfied,” said Machyna as cited by TASR, who said that the strike is not the goal but the means. He added that they originally required an increase of gross wages by €60, but in the end they agreed to an increase of €10.

General director Girardon also labelled the agreement about an appendix to the collective agreement as an intelligent compromise taking into consideration the future as well as competitiveness of the plant.

The negotiations about the amendment of the collective agreement started in January.

PSA Peugeot Citroën is the youngest of three carmakers in Slovakia. Last year it manufactured more than 255,000 cars. It employs 3,500 people. Girardon specified that the carmaker is preparing for the launch of production of a new model already in 2016.