OĽaNO and NOVA join forces before the general elections

THE ORDINARY People and Independent Personalities (OĽaNO) and NOVA movement will run jointly in the general election in March 2016, their leaders Igor Matovič and Daniel Lipšic, respectively, told the press on June 29. 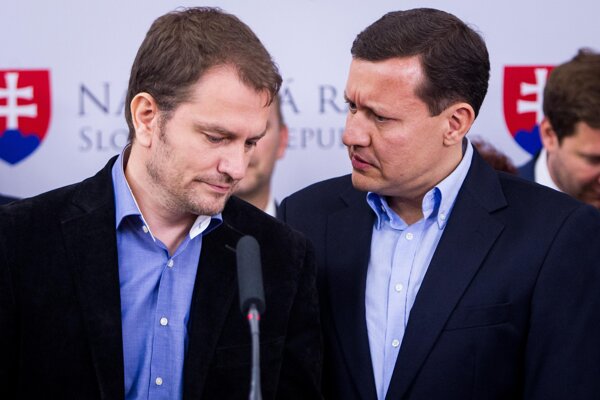 The political scientists, however, have different views on such a coalition.

Both Matovič and Lipšic stated that they are not ruling out cooperation with other parties, either.

“After dozens of joint press conferences, several protests concerning the CT [scanner scandal at Piešťany hospital] and other joint activities, I can reach out to Daniel Lipšic and his NOVA party and announce that we will run jointly in the general election,” said Matovi, as quoted by the TASR newswire, adding that the leader of the grouping will be decided on in the actual general election by the voters via their preferential votes.

Matovič went on to say that he himself will be featured, as always, in the final place on the slate.

The project has great potential as it is not dependent on oligarchs and financial groups, added Lipšic. The two parties had polls carried out by Focus agency on their behalf for three consecutive months that showed that they would receive around 11 percent in an election if they teamed up.

At the same time the two leaders confirmed that they are open to cooperation with other political entities. They are currently talking with Freedom and Solidarity (SaS), for example.

“We are not closing ourselves off and are not ruling out cooperation with SaS and other entities that take it seriously and are able to prove where they got the money for their campaigns,” said Matovič, as quoted by TASR.

Political analyst Miroslav Kusý is however sceptical about the coalition.

“OĽaNO as the party of non-partisans is an oddity,” Kusý told the SITA newswire. “If it joins forces with the party with the standard programme, like NOVA, it is squared oddity.”

Moreover, Matovič is not considered a reliable partner as he betrays everyone who he has collaborated with. Though he was trying to win support of voters dissatisfied with standard political parties, he cannot do it again as his actions do not evoke much trust of voters, Kusý added.

“They are both conservative Christian parties,” Baránek told TASR, adding that the parties’ voters will not have a problem with the alliance. However, this would change if they were joined by SaS, Baránek said.

Another problematic element may be Matovič himself as he has appeared in various conflicts, added political analyst Grigorij Mesežnikov.

Nevertheless, both Mesežnikov and Baránek say that the OĽaNO-NOVA alliance may be successful in the 2016 general election.