A town without fortifications

RUŽOMBEROK is one of the few Slovak towns that did not have a fortification in Middle Ages. It did not even need it, as it lied on a kind of plateau and from both sides, it was protected by the rivers Revúca and Váh. 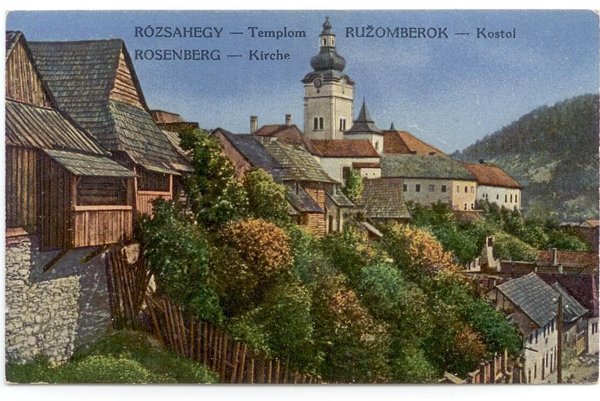 The magic of its unusual location can be seen also in this nice postcard from the very beginning of the 20th century.

The Ružomberok “acropolis” is dominated by the Church of St Andrew. The tower contains the oldest bell in the Liptov region, called Andrej. It was cast in 1506. The church sits in an oblong square, surrounded by burgher houses. These used to be built from wood, as evidenced by the unique wooden verandas in this image.

Initially, exclusively Germans inhabited the upper part of the town. The Slovak population concentrated in Podhora, the town borough lying under the acropolis. This divide between the two ethnic groups symbolised their relationship. Germans had many more advantages, while Slovaks had to settle for a second-class position. However, this situation was prevailing in the whole country, and it took several centuries before Slovaks managed – gradually – to settle in the upper town.

Upward mobility for Slovaks was accompanied by remorseless, and also endless, competition. The official market was in the upper part, while down below an unofficial market emerged. Those living “up” meticulously guarded their right of drawing beer and selling food, while those “down” below constantly broke the rules. No wonder that Ružomerok inhabitants often ended their disputes before the king.

The vertical dynamics thriving around the whole territory of current Slovakia gradually influenced both sides. Germans got more and more Slovak-ised, and Slovaks grew to learn a lot from their competitors, becoming more advanced economically and in their crafts.