PUPILS at elementary schools in the villages of Ludanice and Preseľany, near Topoľčany, trained with machine guns using blank cartridges under supervision of a paramilitary organisation, Slovenskí branci [Slovak Levies], that was monitored by the Slovak Information Service (SIS) intelligence agency. 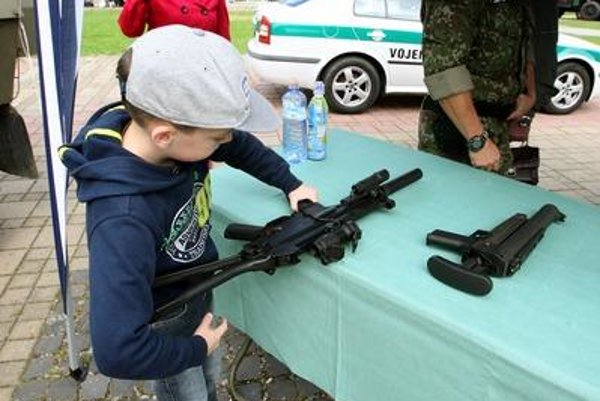 “It is important for our nation to take care of the future generations,” Slovak Levies wrote on its Facebook webpage, where it released photos of the events.

“There were other motives behind rhetoric about patriotism and national defence which displayed their connections to extremism and extremist subjects,” reads the report.

Slovak Levies say it allowed students to look at their equipment, arms, and chemical protection gear. It also allowed them to fire a machine gun.

Besides military-related activities, Slovak Levies provides courses on drug abuse prevention and about Slovaks’ Slavs ancestors and their connection to modern Slovaks and Slavic countries.

Ludanice elementary school director Vladimír Káčer told the Denník N daily that Slovak Levies initially approached him, and after discovering that the group was not banned by the authorities he allowed them to visit the school.

“It was not a banned group so I didn’t care,” Káčer said, as quoted by Denník N. “I just told them to not involve any politics.”

Slovak Levies asked for permission from Ludanice Mayor Ľubica Petráková.
“Why should I have some problem with it,” Petráková told the daily. “Is it a bad organisation or something like that?”

“Self-proclaimed people who explain something about military duty, I don’t like it regardless of whether they have a criminal record,” Kaliňák told public broadcaster RTVS.

The Slovak Levies also showed pictures of members posing with students of a hotel academy in the town of Humenné while carrying machine guns and wearing balaclavas.

The school management refused to be connected with Slovak Levies group activities, claiming that they it did not organise any training there. The older fourth-grade students offered their help with organisation of outdoor physical activities, teaching their younger schoolmates about travelling in the forest and basic safety rules, according to the school’s press release.

“Slovak Levies used the participation of students on the course of physical activities for propagation of their own activities,” read the press release.

The Slovak Spectator approached the directors of the school, but they did not respond.

The police told Denník N that it would check the use of guns with blank shells at primary schools to see whether Slovak Levies and teachers violated the law by allowing small children to use them. Police monitor the group, describing it as sports-military organisation. People with extremist views could be part of the group because in the past it supported the activities of Slovak Revival Movement, which is a defender of the president of the Nazi-allied wartime Slovak state, Jozef Tiso.

Membership numbers in the Slovak Levies are rising. They question Slovakia’s membership in NATO and EU and have ties with instructors who were members of Russian special forces. Their opinions are not in line with history, sociology and ethics which are part of national curriculum, according to Daniel Milo, the secretary of the committee for extremism prevention at the Interior Ministry.

“The State School Inspectorate has not received any complaints from parents about this matter, however the information from the media is enough of an inducement to conduct a [general] inspection,” Ksenzsighová told Denník N.

Schools inviting Slovak Levies are the result of the long-term failure of the government’s work with youth, according to several activists, including Institute for Public Affairs head Grigorij Mesežnikov, co-founder of the Public Against Violence party Fedor Gál, and analyst Mario Nicolini. In an open letter to the government they state that the government leaves much space for the activities of militant extremists.

The government should provide possibilities for them to meet with soldiers, police officers, firefighters or rescuers who are real modern-day heroes for our society, according to the activists.

“Extremists at schools are just the tip of the iceberg,” reads the letter, “but there is also a secretive several-years-long effort to gather sympathisers among first time voters and youth through attractive activities using weapons, military tactics and group identity.”