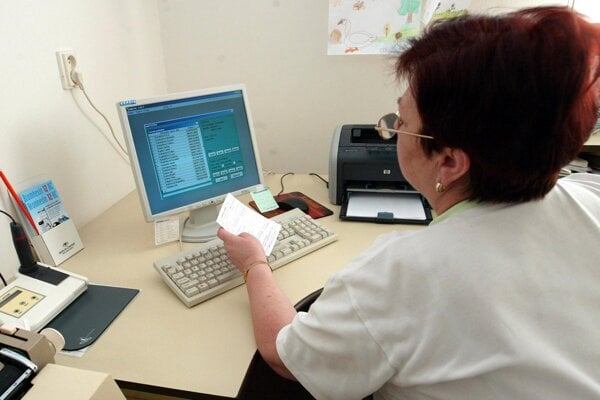 A SICK man gets out his health insurance card and puts it into a terminal at a doctor’s office. His general practitioner prepares a diagnosis and then, without a referral slip to a specialist or a pharmacy prescription, the patient moves on to the specialist for another examination or to the pharmacy where he picks up his medications by putting the same card into another terminal. This is how the Slovak health care is supposed to work via the eHealth electronic system that is to begin in 2017.

The eHealth system consists of a central database accessible to health-care providers, laboratories, pharmacies and patients. Patients need an eID or electronic health insurance card to join the system and other eligible people can use the electronic card of a health-care professional. Additionally, the system includes access to data about medicines in electronic forms via eMedikácia and ePreskripcia that allow pharmacies to dispense medicines without a written prescription.

The Health Ministry plans to launch pilot services with selected health-care providers during this year.

“The first-phase projects are almost finished,” the ministry’s spokesperson Peter Bubla told The Slovak Spectator, adding that after the first connection is made all remaining providers will gradually join, resulting in the nationwide system envisioned under the terms of the legislation beginning from January 2017.

Preparations for the e-Health scheme started in 2008 and about €50 million has been spent.

The system is currently being tested by experts and medical professionals who are allowed to try out the eHealth software and applications. Afterwards, a pilot operation will be launched and the information systems of specific health-care providers will be integrated with the national eHealth system and doctors will be able to use the services and applications of eHealth in their work.

The Slovak Medical Chamber (SLK) perceives the testing system in a positive way as its design has been created in cooperation with existing suppliers of health-care information systems.

“The system should not pose a big change for providers who use commonly available medical software,” Miloslav Ostrihoň from SLK told The Slovak Spectator.

According to the Association for the Protection of Patient’s Rights (AOPP), the design of the system is simple, easy-to-use and should not unnecessarily burden a patient.

However, experts from the Health Policy Institute (HPI) think-tank and the Slovak Union of Medical Specialists (SLÚŠ) have doubts about the project. Tomáš Szalay from HPI pointed out that the delay in its launch means the system will never be deployed in practice in its prepared form, while doubting whether it would be able to use the potential to provide useful information.

“Big government IT projects are problematic even in countries with better state and public administration,” Szalay told The Slovak Spectator.

In addition, Szalay recalled that postponement in the launch of the system has resulted in a loss of political responsibility because the nearest launching date of 2017 is beyond the horizon of the next parliamentary election in March 2016. The previous launch dates had been for the beginning 2013 and then the beginning of 2016.

“I personally perceive the eHealth to be a major failure of the government,” stated Szalay.

Szalay also sees it as problematic that the eHealth system has not been designed by those to whom it should serve such as health insurance companies and health-care providers but rather by state administrators who tried to solve business problems which they do not understand.

In the past – and even now – doctors have to record much data about a patient and the diagnosis and treatment and write referrals for specialists and prescriptions for pharmacies. So eHealth and a reduction of written records could lead to an increase in efficiency and better quality care.

The Health Ministry has said that patients will feel the benefits of eHealth in a reduction of medical errors, additional payments for medicines, unnecessary absences from work and travel costs as well as less of a time burden on both patients and doctors.

Katarína Kafková, the president of AOPP, thinks that the system will also bring patients easier access to accurate and trustworthy information about their health conditions and save public resources that can be used for the treatment of more patients.

SLK expects that eHealth will increase the comfort of medical examinations and allow for better checking of results at home.

The ministry also emphasised a direct benefit to medical staff, specifically the possibility to practise medicine in a better and safer way due to access to detailed, credible and up-to-date information.

“Thanks to eHealth, medical workers will have better access to comprehensive data from the National Health Information System,” said Bubla, adding that the electronic card of a medical professional will be used to sign patients’ medical records as well as to obtain up-to-date information about a patient’s condition, medications and the health care previously provided.

Peter Makara from the Slovak Society of General Practice (SSVPL) says that even though eHealth will not replace a doctor’s personal approach it ensures faster information sharing and perhaps more efficiency in using limited resources. But he added that it is still necessary to augment financial resources for health care and to provide doctors with more time to spend on a patient’s treatment.

According to Ladislav Pásztor, the president of the Association of Private Doctors (ASL), true benefits will be visible only when the data sharing system is working with the vast majority of providers, noting that this will be when it is possible to create a comprehensive picture of a patient’s health condition.

While doctors acknowledge the benefits the new system may bring, they have concerns about the security of electronic communication and the concentration of such a large amount of data in cyberspace as well as the potential financial burden of implementing eHealth in their medical practices and shouldering its ongoing operation.

The Health Ministry stated that a high level of security for individual’s medical files has been a key requirement during the development of eHealth.

“The most important measure is a division of clinical information about a patient’s health conditions and personal identification data and protecting interconnected release by using individual cipher protection,” stated Bubla, adding that this kind of encryption protects personal data from being used, even by administrators of the system. “Compared with the current systems, with unknown security levels and sending data to insurance companies via email or on a CD, eHealth brings us an infinitely better level of security.”

In terms of finances, ASL has insisted that the government provide grants for hardware purchases, the additional costs for telecom services, for upgrading of medical software as well as for the time spent in completing the so-called patient summary that serves as the basic data on each patient.

“We would also welcome a clear declaration on the payment of the costs and additional work by doctors, providing access to the system for nurses, and reduction of the scope of the patient summary,” Pásztor said.

Completing the summary can take up to 20 minutes for each patient and some doctors have more than a thousand patients, wrote the Denník N daily.

SLÚŠ has criticised the annual maintenance costs, provisionally calculated to be €450 for each medical practice, arguing that it is too much for a small private practice.

“eHealth will cause a decrease in reimbursement of health care provided for citizens as the information technologies will be better rewarded than hands-on medical work,” Andrej Janco from SLÚŠ told The Slovak Spectator.

As compensation for the time and costs of moving to the system, SLK has proposed a subsidy of €1,000 to a health-care provider for the connection to eHealth or €0.50 to €2 for each patient’s electronic health insurance card.

“All this is under professional discussion and the ministry has not yet quantified the expected financial complexity and elaborateness of the connection,” Ostrihoň said.

Another snag that may impede the system and reduce its efficiency is its acceptance by individuals and medical practices. According to the Association for the Protection of Patient’s Rights, eHealth could be rejected by both doctors and patients.

“Full service requires a clear explanatory campaign that will prevent the emergence of doctors’ and patients’ fears, particularly those who do not have experience with modern technologies,” Kafková said.

There may also be mistrust in eHealth if the system experiences unexpected issues related to less than complete preparation. General practitioners also foresee a possible failure of a medical practice’s internet connection, a lack of appropriate connection speed during an urgent online issue and other delays.

“If the system goes awry a doctor will dedicate more time to working with the computer than with his or her patient,” Makara said.

Janco agreed with the assessment of a general lack of suitable technical equipment as well as what he said was the absolute unpreparedness of health insurance companies and the government in financing the costs connected with the purchase of necessary equipment.

“Resources have already been depleted in the planning phase and all the coming costs have been passed on to health-care providers,” Janco said.