What happened to the wooden churches in Slovakia

23. July 2020
Wooden churches have made it to the UNESCO World Heritage List. This one, from the village of Mikulášová, is now located in the Bardejovské Kúpele open-air museum. (Source: Donald Stoll)

Of more than 300 wooden churches, only 60 remain, mostly in eastern Slovakia. Check the complete list and an interactive map.

​Slovakia is so exotic – castles, Alpine vistas, manor houses, charming villages, rivers, gorges and caves – that happening upon the amazing architecture and intriguing stories of its approximately 60 surviving wooden churches can almost be dismissed as merely ordinary.

But the wooden churches of Slovakia are anything but ordinary, and some are more than 500 years old. Slovakia also has large wooden sculptures designed and crafted by unnamed artists, scattered around the rolling hillsides of the rural northeastern part of the country, begging the question, “How does find enough wood to do this on such a large scale?” Digging just a little into their backstory uncovers diabolical plots and amazing counterplots of the religious wars that plagued Europe from the Reformation onward.

Slovakia’s wooden churches fall into several groups, distinguishable by their architecture and purpose. The first is the Roman Catholic Gothic structures. Built as wooden versions of the stone structures of the same period (the 15th and 16th centuries), these churches provided their communities with a grand site for worship and celebration. The builders used wood because it was available and affordable and local craftsmen knew how to work with it. The buildings resemble the architecture of the stone Gothic churches in nearby urban centres but took a year or two to build (compared to the 10-100 years for a stone and masonry building) and cost a fraction of the fortune communities invested in their stone churches.

What is remarkable is that four examples of these 500-year-old structures are still standing. More details about them can be found in our travel guide Slovakia. The oldest (built in the 1490s), named for St Francis of Assisi, is in Hervartov, a small, out-of-the-way village near Bardejov. The building is one of eight wooden churches making up the UNESCO World Heritage site of Carpathian Wooden Churches. The church is quite tall with a stone floor and some remarkable wall paintings that were added in 1665.

A second, also from the 15th century, is in Tvrdošín in Orava. The community served by this church has continued to flourish, and the building has undergone alterations and improvements. The wooden carvings, the stunningly beautiful wall paintings and the ancient cemetery next to the building make this an attractive visitor site. The third, a much simpler building, was rescued from its original site in Zábrež and is now in Zuberec, Orava’s open-air museum. A church from Rudno was also moved and today stands in the Museum of the Slovak Village in Martin. 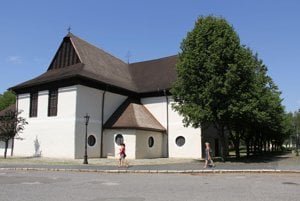 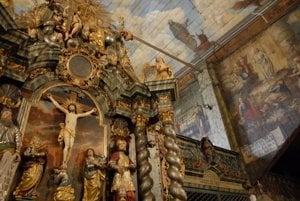 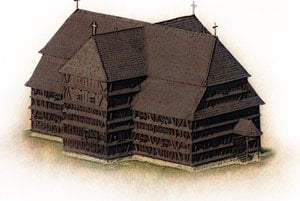 While the Roman Catholic wooden churches represented an affordable alternative to stone churches, their noteworthiness comes from their charm and durability rather than the politics surrounding them. Some wooden were churches built for a religion departing from the predominant Roman Catholic tradition and are noteworthy not only for the artistry of their buildings but because of the limitations their builders faced.

In 1681, in an effort to make concessions to the non-Roman Catholics in his kingdom in the wake of religious friction and the imminent Ottoman invasion, King of Hungary Leopold I managed to get an edict included in the articles of the Congress of Sopron in Hungary. Leopold’s goal was to keep reformers from gaining strongholds and, hopefully, avoid the expensive and destructive wars that plagued the rest of Europe.

The edict declared permission for Calvinist and Lutheran congregations to build churches within the Kingdom of Hungary. However there was a twist – only Roman Catholic churches could use stone and metal as building materials. Churches serving all other faiths were given a long list of rules on what they could and could not do. The reformers’ churches could only be made of wood, have minimal foundations, and have no tower. They needed to be built in a one-year period from ground-breaking to finish and be situated outside the town gates.

Fortunately, these religious builders were not intimidated, and the decisions made to meet the challenges of this decree led to a very distinctive church style. Builders used ingenious carpentry techniques for joining together pieces of wood to create these lovely churches that have more in common with sculptures than the hard vertical and horizontal lines of brick and mortar buildings. 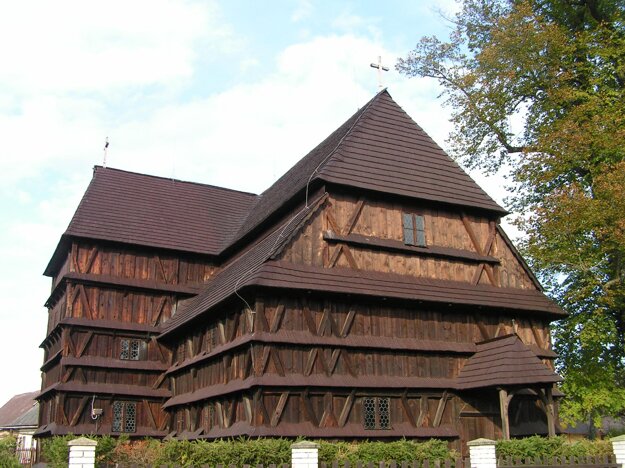 While the Calvinists did not have a large following among the Slovaks, Lutherans did and with the financial and architectural support of Scandinavian Lutherans, 38 wooden churches were built between 1718 and 1730, five of which survive today.

The church buildings are miracles of architectural design and brilliant craftsmanship. All were designed in the form of a Greek cross, have pulpits built into the wall and are often quite large (seating as many as 1,100). Many also feature pipe organs original to the church and intricately carved wooden altars. The interiors are decorated with elaborate wall paintings, many in the style of 18th century trompe d’oeil with forced perspective, realistic draperies and columns.

Three of the churches are included in the UNESCO World Heritage List – Kežmarok, Hronsek and Leštiny. All are still in use as sacral buildings.

The third group of churches in eastern and northern Slovakia is only a continuation of the story of their gothic relatives. Local woodcarvers used the abundance of wood in poor regions to build sacral constructions. It is said that iron was not used during construction of churches because it was a symbol of the crucifixion of Jesus, but conservationist Milan Dudáš, who significantly contributed to inscribing Slovak wooden churches onto the UNESCO World Heritage List, says that the reason was completely prosaic: “Skilled masters did not need iron because they knew how to join logs firmly with [wooden] pins”. 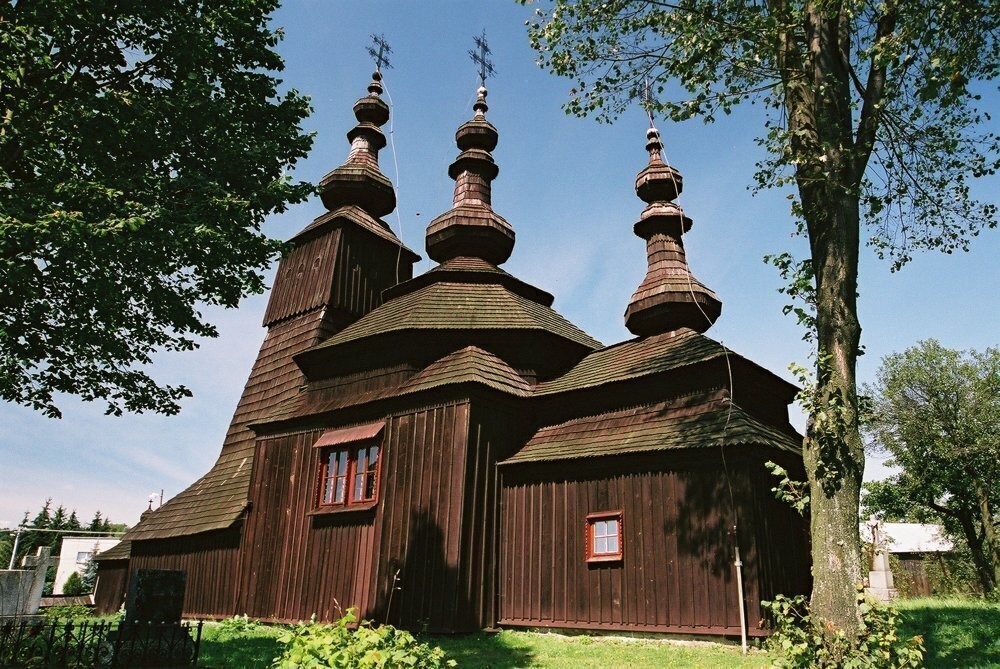 In the 17th and 18th centuries many villages and small towns were not able to afford to build stone buildings. On the territory that is now Slovakia, there might have stood more than 300 wooden churches. According to Dudáš, a wooden church was in every third village. Wooden churches gradually disappeared along with the growth of standards of living. “Wars also played its role when priests decided to build churches from stone rather than repair original, but damaged, wooden churches,” said Dudáš. Among the preserved wooden churches the Greek-Catholic ones make up the biggest portion.

Instantly identifiable, most have three (think Holy Trinity) connected buildings arranged on an east-west axis with towers of ascending heights, the tallest in the west and the lowest in the east. The roofs are covered with wooden shingles, often taking advantage of the irregular shape of the shingles to create a distinctive pattern. Roofs seem to ripple and flow like snakeskin. Often the domed onion-shaped roofs include spires with decorative crosses.

Most are set on a foundation of stone and the buildings, often polygonal, are made of logs notched at each end and stained a dark brown. Piling logs on top of each other does not encourage windows, so most churches have only one door.​

When viewed from the outside, the churches are very interesting historical artefacts. Once inside, they rapidly achieve the rank of incredible works of art. The first of the three buildings is the entrance and is referred to as the women’s section because men and women did not worship together. The middle section is the nave where the men gather. The third section is the sanctuary and is the domain of the priests. In Greek Catholic churches the iconostasis, a screen made of wood and intricately decorated with painted icons, separates the nave from the sanctuary. Icons are situated in a traditional order, depicting biblical stories from the Old and New Testaments and, like most church art, served to teach the faithful the central stories and tenets of their faith. Their settings also seem codified. Most often set aside from the village they serve, these wooden gems are placed atop a hill and surrounded by wooden fences with shingled tops. Entry is gained through a gate, also shingled and often very elaborate. Many have a bell tower within the fence as well as a cemetery of small headstones and crosses.

Most of the Greek-Catholic churches are in Prešov and partly in Košice regions (eastern Slovakia). Three are included in the UNESCO World Heritage List as Carpathian Wooden Churches (Ladomirová, Bodružal, Ruská Bystrá). Travellers with limited time can visit skanzens at Bardejovské Kúpele and the Museum of Ukrainian-Ruthenian Culture in Svidník, where churches are located in a traditional environment.

Those starting from Bardejov to seek the adventure of seeing working wooden churches should visit Frička, about 20 kilometres north-west, and the Greek Catholic Church of Michael the Archangel. The church was built in the 18th century, and the iconostasis dates back to 1830. Another church, about 15 kilometres west of Bardejov, is St Luke the Evangelist in Krivé. St Luke’s has undergone some 20th-century reconstruction but contains priceless elements of iconic art. 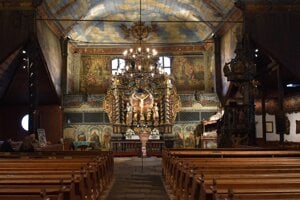 Listen to the podcastSpectacular Slovakia #40: What do Slovakia and Scandinavia have in common?Read more

The wooden church aficionado needs to visit the Svidník area, particularly the church in Ladomirová, built in 1742. The iconostasis and the altar in this UNESCO site date from the 18th century. Just inside the gate is a map naming 12 wooden churches within easy driving distance and promising a wonderful day of exploring.

While the beautifully crafted buildings and their priceless art make Slovakia’s Greek Catholic wooden churches worthy tourist destinations, another value of visiting these sites is to experience the sacral setting. These churches are small, intimate, ancient and undeniably spiritual and for many, an experience never to be forgotten.