THE CITY of Martin in northern Slovakia has been involved in a lengthy lawsuit and after 16 years recently lost a case involving a claim of €8.4 million. The result could force the city to privatise its water company, a result Mayor Andrej Hrnčiar says they refuse to accept. 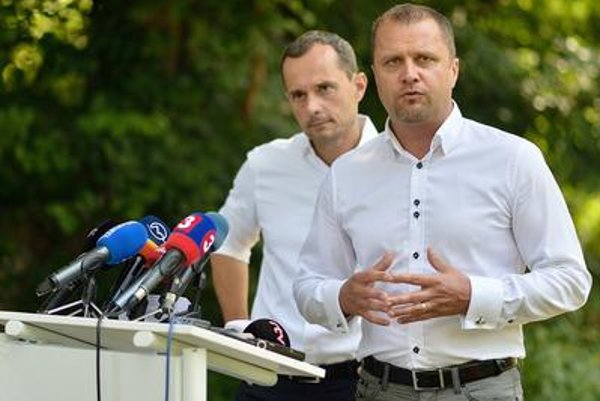 Beginning July, Hrnčiar, and mayors of nearby towns (Iveta Balšianková of Dolný Kalník, Viera Šalagová of Dražkovce and Ján Lukáč of Trnov) delivered a letter – singed by more than 18,000 inhabitnats of the region of Turiec – calling on Prime Minister Robert Fico to intervene and prevent the privatisation, the TASR newswire wrote. They also ask the government to file in a fast-tracked proceeding an amendment to the Distrainment Code that would exempt water as a strategic material, owned by the Slovak Republic.

Chairman of the extra-parliamentary party Sieť (i.e. Network) Radoslav Procházka was the best man at the wedding of lawyer Peter Kubík of PK Factoring, who is set to receive an €8.4-million settlement from Martin – governed by Sieť’s Andrej Hrnčiar, Fico claimed on July 15.

“Sieť vice-chairman Andrej Hrnčiar should pay more than €8 million of the public money to a person close to Sieť chairman Radoslav Procházka,” Fico said, as quoted by TASR. “I’m asking publicly Mr. Hrnčiar – who keeps asking me [about the issue] – what are you doing, Mr. Hrnčiar and Mr. Procházka? What kind of game are you playing with the public?”

He is ready to help Martin, he said, but not before Procházka and Hrnčiar explain their strange involvement in the case which dates back nearly 20 years and involves Martin’s breach of contractual obligation under a previous administration toward the company Lyžiarske Stredisko (ski resort) Martinské Hole – the property owner. In 2002, the amount was only €3.4 million, but interest has been accruing. According to a Supreme Court ruling, Martin should pay €8.4 million to PK Factoring, owned by Kubík.

Following an intervention by General Prosecutor Jaromír Čižnár, the court has suspended the payment but has not quashed the case itself.

According to Hrnčiar, Fico has spit in the face of 18,000 people who have signed a non-political petition asking him to save by way of an amendment to the Distrainment Code the Turiec Water Management Company.

“The connection that was made by [Fico] is completely illogical,” he said. “When I sent him a personal letter after a scandalous decision of the Supreme Court [ruling that Martin should pay the amount], it was clear that the claim was owned by a businessman from Žilina who then told the media that he sold it to a Cypriot company. Lawyer Kubík didn’t feature in the case at that time at all. He entered it several weeks later, and attempted to manage an agreement that we eventually rejected. We refuse to pay even a single euro from the public finances to a private company, when we believe that the law and justice are on our side.”

The Martin mayor said that he was shocked to hear Fico’s interpretation of events. He stated that if he had an agreement with Kubík he would have paid the claim without attempting to see it scrapped by the courts.

“I don’t understand this [reasoning],” he summed up.

If Martin does not succeed at the Supreme Court, it will turn to the Constitutional Court, with also the European Court of Human Rights being another option.

“We don’t want any loan from the government - we only want an amendment to the Distrainment Code,” Hrnčiar said. “If the government doesn’t approve it, we’ll probably present it as an MP’s bill. I didn’t want to politicise this case, as opposition proposals mostly aren’t approved. That’s why we wanted to do it this way.”

However, the current owner of the claim, Bratislava-based lawyer Peter Kubík, filed the proposal to start a distrainment on June 17 – which the city can avoid for now, thanks to the SC ruling. However, in case of the distrainment being implemented, Martin can lose 52 percent of its shares in the Turiec Water-management Company, the SITA newswire wrote.