WHILE a preliminary list of foodstuffs on which the value added tax will be reduced leaked in mid June, the final list will only emerge in late August. 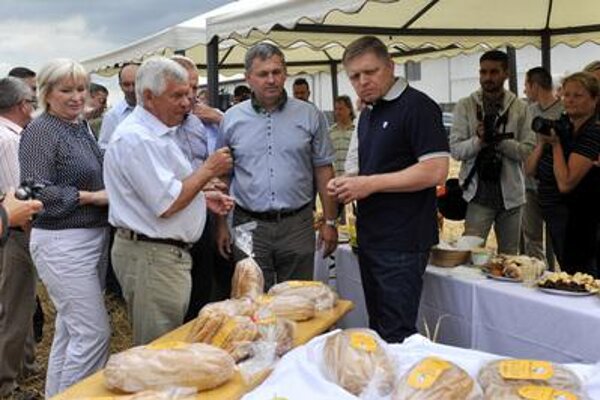 Prime Minister Robert Fico announced in mid-July that the government would make the final list public only after it takes the form of a draft bill, but confirmed that VAT will be reduced on bread, milk and fresh meat.

Reduction of VAT on basic foodstuffs from current 20 percent to 10 percent is one of 15 measures of the proposed second social package with the price tag of €200 million which Fico introduced at the ruling party’s congress in Bratislava on May 23. Estimates how much this measure will cost the state budged oscillates between €60 million and €100 million in lost budgetary revenues.

“We’re virtually finished [drawing up the bill],” said Fico on July 14 as cited by the TASR newswire. “We already roughly know which foods will come under this framework, but we won’t make it public before it takes shape as a law. Nevertheless, we already can speak about bread, milk and fresh meat. I have to stress that it will concern fresh meat, as we aren’t interested in supporting imports of frozen meat.”

The plan is that the new law on VAT rate reduction applying to selected foods will be presented for discussion in parliament in September while the cabinet should approve it by the end of August. The new legislation should become effective as of the beginning of 2016.

According to Fico, the discussion which foods should be put onto the list is going on while the Agriculture Ministry has elaborated first analyses.

“I believe that tough negotiations with retailers and retail chains will make sure that the translation [of the reduced VAT rate] into prices will be as much as possible,” said Fico.

Agriculture and Regional Development Minister Ľubomír Jahnátek specified that the government will specify individual classes of foodstuffs that will be subject to the lower VAT rate in order to prevent misuse.

“The ministry has prepared an exact description of 157 types of products – concerning the type, composition and quality,” said Jahnátek, adding that in order to see the lower VAT rate be translated into lower prices on the shelves, the government will be monitoring the prices in cooperation with municipalities, the Slovak Agrarian Chamber, Slovak Food and Agricultural Chamber and the Slovak Association of Pensioners.

In mid June a list of food products to be put onto the list disappointed food producers as it contained only two kinds of milk, butter, and the most commonly consumed breads and fresh meats. There were no yogurts, cheese, rolls or meat products. At that time Jahnátek specified that they are setting up the list in order it contains those foodstuffs consumed the most also by low-income groups of citizens, children, pensioners as well as food produced in Slovakia.

The Agricultural and Food Chamber (SPPK) was disappointed by the leaked list as it expected a wider assortment of groceries with the reduced VAT.

“We miss there products of other food producing branches, for example flour, sugar, oil, vegetables, eggs and others that also can be considered to be basic foodstuffs,” said Jana Holéciová, spokeswoman of SPPK, in mid June as cited by TASR. “We would also welcome adding dairy products like cream or white yogurts.”

“In the end we would get to the conclusion that only the most common bread and one kilo of lard is the basic food as it was in the past,” said Drahovský as cited by the Sme daily, adding that the result may be an unhealthy diet of socially and economically weaker groups of citizens.

The opposition non-parliamentary party Skok of Juraj Miskov calls for a flat reduction of VAT on foodstuff from current 20 percent to 13 percent, arguing that the high VAT on foodstuffs leads to the highest food prices in Slovakia compared with neighbouring countries. This results in so-called shopping tourism where citizens of Bratislava and its vicinity go shopping to Austria, people from southern part of Slovakia shop in Hungary and those living in the north shop in Poland.

In the Czech Republic the reduced VAT rates on food is 15 percent, in Austria 10 percent, it's 5 percent in Poland and 18 percent in Hungary.