A CONSIDERABLE part of the territory of today’s Slovakia belonged to the so-called Royal Forests, vast complexes meant primarily for hunting. These reserved hunting grounds were used mostly by the Hungarian emperor and his entourage – this is how the Middle Ages looked when these huge forested areas were used only by the elites of the monarchy. 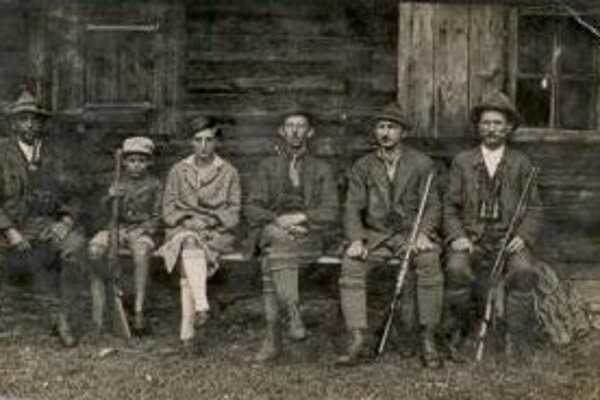 Hunters in front of a lodge (Source: Courtesy of B. Chovan)
Font size:A-|A+0

Royal hunters most often visited the Zvolen, Hont and Spiš forests but the vicinity of today’s Komárno was also used for hunting. After initial, unrestrained hunting, the royal court realised the need to regulate the game stock and thus the first game parks were established. Close to the hunting grounds, settlements of the emperor’s serfs mushroomed – who in one way or another participated in the hunting or took care of the game. For example, the village of Sokolníky was founded by falconers (sokol means falcon), Rybáre by people dealing with maintaining and catching fish (rybár is a fisherman). There are also villages in Slovakia called Dravce (birds of prey), Psiare (psi means dogs) or even Lovce (hunter).

This group of hunters posed for a photo in front of a hunting lodge in the cadastre of Ľubietová in central Slovakia on August 4, 1929. All of them are dressed in typical hunters’ clothes.

Apart from special clothing, many rituals are connected with hunting, many stemming from the Middle Ages. There also is special terminology for hunting, often influenced by the German or Czech languages. There are special rules as well, for instance regarding who can be considered the victor if several hunters hit the same prey. A last tribute to the shot animal is still observed. These rules and many similar ones are evidence of the enormously long tradition of hunting in Slovakia going back to pagan times.