WHAT is now a commemorative day marking the creation of Czechoslovakia on October 28 (1918) should be made into a state holiday paying tribute to Milan Rastislav Štefánik, a Slovak who played an important role in the creation of a joint state of Czechs and Slovaks, according to an opposition proposal. 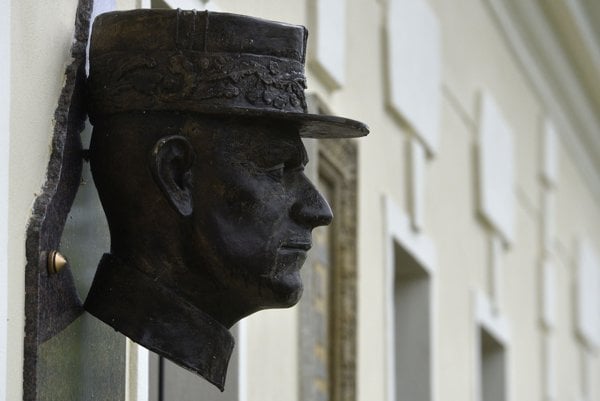 The bust of Milan Rastislav Štefánik in his natal village of Košariská. (Source: TASR)
Font size:A-|A+0

MPs Ľudovít Kaník of the Slovak Democratic and Christian Union (SDKÚ) and Peter Osuský of Freedom and Solidarity (SaS) proposed the change on July 21, the 135th anniversary of Štefánik’s birth.

“Štefánik is the most respected politician in our modern history,” Kaník said, as quoted by the TASR newswire. “Without his role in setting up Czechoslovakia, we could now be living in a different state. Meanwhile, this politician does not have a state holiday, and he does not have a day on which his work is commemorated, either.”

The new state holiday should be called ‘Day of Tribute to the Work of Milan Rastislav Štefánik – the Founding of Czechoslovakia’.

Osuský noted that it would be more appropriate to commemorate Štefánik on the day when his work was completed – when Czechoslovakia was created – than on the anniversary of when he was killed in a plane crash, May 4, 1919, as reported by TASR.

The MPs do not want to increase the number of state holidays, and so they would like to relegate Constitution Day celebrated on September 1 to a mere commemorative day, thereby making it a working day. They have attempted to introduce this change several times already.

Slovakia has five state holidays: the Day of the Setting Up of the Slovak Republic (January 1), Saints Cyril and Methodius Day (July 5), the Anniversary of the Slovak National Uprising (August 29), Constitution Day (September 1), and the Day of Fight for Freedom and Democracy (November 17). The country also has another 10 public holidays and 16 commemorative days. The latter are working days.