US actors will arrive in Roma settlements again

THE ACTORS from New York’s Dramatic Adventure Theater (DAT) will come to Roma settlements in eastern Slovakia to support the personal development of children, youth, and parents from the marginalised communities. 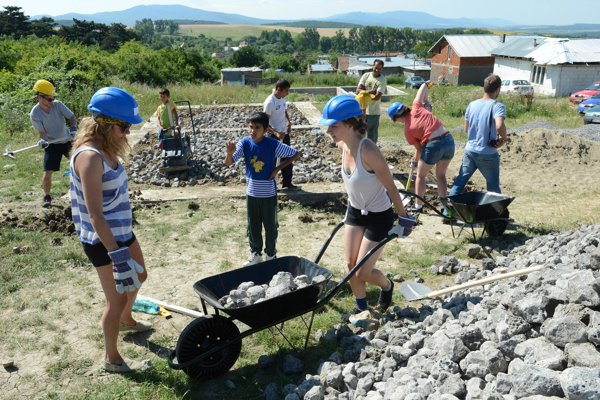 The workshops which will take place between July 22 and 28 in the villages of Rankovce, Veľká Ida (both Košice Region), and the town of Stará Ľubovňa (Prešov Region) are organised by the ETP Slovensko non-governmental organisation, the SITA newswire reported.

Altogether 41 artists will work with children and young people both individually and in teams.

“Their aim is to inspire the workshops’ participants to be able to express their feelings through art, to think about positive and negative events in their life, and to know how to show their experience on stage,” ETP explained in the press release, as cited by SITA. “Thanks to this creative work the children and youth become self-confident, learn to respect one another, collaborate, and realise the uniqueness of their origin and pride of the Roma culture.”

Participants will create theatre plays with the US actors from the beginning to the end. They will pick the story and plot of the performance, create characters and also dialogues.

“With this technique the children and youth will freely express what they think, feel and how they perceive what happens around them,” ETP continued, as quoted by SITA. “Every performance is unique as it reflects the emotions and life stories of the actors.”

The actors from DAT will also cooperate with locals to improve life in the settlements. For example, on July 24 they will join volunteers from Habitat for Humanity International, the Dutch Embassy in Slovakia, and ETP Slovensko to help Roma in Rankovce build their own family houses, paid for by microloans provided by ETP, SITA reported.

The US actors will come to Slovakia for the fifth time. Back in 2011 they and ETP Slovensko organised the first interactive theatre workshop for the children and youth from Podsadok in Stará Ľubovňa.

“The previous years of workshops confirmed the unique effect of such social-artistic meetings,” ETP Slovensko said, as quoted by SITA.