ENEL CEO Francesco Starace says that his company will sign a memorandum of understanding on the sale of shares in the in Slovakia's largest power producer, Slovenské Elektrárne (SE). 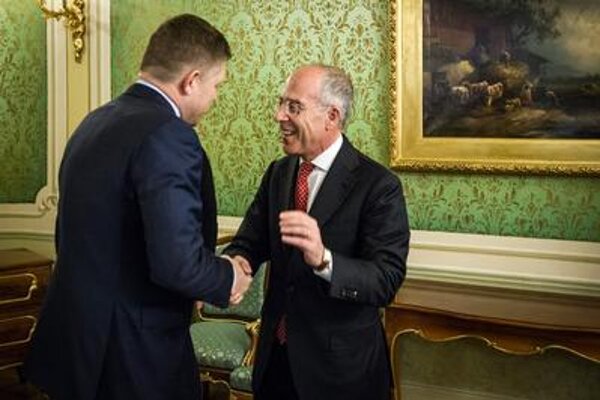 “Towards the end of the month our decision will be known,”  Starace said July 21 as cited by Italpress. “We will sign memorandum of understanding which will enable the start of exclusive negotiations.”

Enel owns 66 percent of SE, with the state owning the rest. Starace has said the sell off will take place in two phases, meaning multiple investors could acquire stakes. Prime Minister Robert Fico has expressed interest in boosting the state to a majority shareholder by buying up an additional 17 percent of the company.

Starace did not specify who are the potential investors. So far the Czech-Slovak group Energetický a Průmyslový Holding (EPH) and the Hungarian-Slovak consortium of MVM Group and the refinery Slovnaft have showed an official interest. The China National Nuclear Corporation (CNNC) and the Slovak government are also potential investors.

Earlier this year Starace confirmed plans to sell at least a portion of Enel's stake in SE to reduce debt, while the plan is to complete the rest of the sale after the second two blocks of Mochovce nuclear power station, now under construction, are complete.

The Economy Ministry plans to announce a selection proceeding to choose an advisor to consult the Slovak cabinet during the sale of the 66-percent stake Enel holds in SE during the final week of July. Economy Minister Vazil Hudak said on July 21 that the advisor will be announced in early August at the latest.

The strategic interest of Slovakia in terms of SE is completion of the third and fourth units of the nuclear power station in Mochovce, Fico said after meeting with Starace July 17.

“Today’s meeting was of exclusively working nature at the level of Prime Minister, Economy Minister and Economy Ministry state secretary as well as other people and Enel management,” he said as cited by the TASR newswire. “We talked only about completing the construction of third and fourth blocks at Mochovce [nuclear power plant].”

Fico reiterated that Slovakia finds itself at the short end of the stick at SE because it has been privatised, with 66 percent of the stock being under control of Enel, which also bears full responsibility for the building of the third and fourth blocks.

The latest plan is to complete the third unit in 2016 and the fourth unit in 2017. The overall cost of the project is €4.6 billion.

SE is also in the process of selecting a company to coordinate the launch and phasing in of the new nuclear facility. The order worth some tens of millions of euros assumes cooperation of hundreds or even thousands of companies of various specialisations, the Pravda daily wrote.

“The negotiations are ongoing,” said Jan Stolár, spokesman of Škoda J. S., as cited by the Denník N daily. “We assume their completion after some months.”

According to Stolár, Škoda J. S. has been operating on the nuclear energy market for some 60 years. It participated in a significant extent in construction of all nuclear power stations being built in Slovakia and the Czech Republic. Škoda J. S. as one of key suppliers has been already participating in completion of the second two blocks of Mochovce.