CHMEĽNICA, one of the few municipalities in Slovakia which have kept their German traditions, is a place where people of German ancestry from several regions tend to gather. 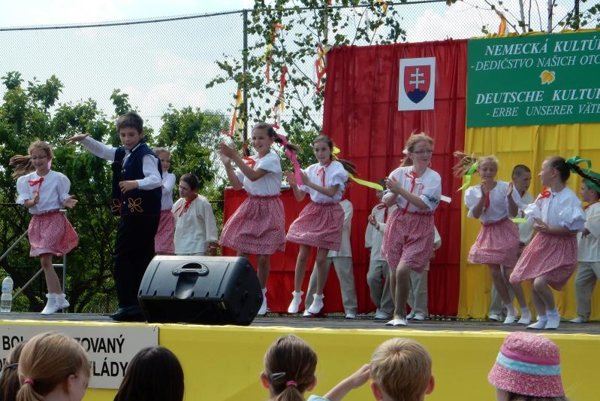 In early June, it celebrated the Days of German Culture.

The 23rd year of celebrations, always a highlight of the summer, coincided with the 700th anniversary of the first written mention of Chmeľnica.

The programme always includes a mass in German – this year performed by an Austrian priest; a parade of folklore ensembles, their performances, and more. Not only the ensembles, but also locals were clad in folk costumes.

The festivities were organised by the local Carpathian-Germans’ Society, the local administration and the Ľubovňa Education Centre in the town of Stará Ľubovňa.

“In the programme, pupils of our school rapped a song with motifs and symbols of our village,” mayor Zita Pleštinská told the Ľubovniansky Korzár regional newspaper. “We also welcomed Germans living in Romania, ensembles from the Slovak village of Medzev, the towns of Handlová, Stará Ľubovňa, and even Košice and Bratislava,” she added.

Chmeľnica is one of few municipalities in Slovakia which have kept their German heritage. Chmeľnica dialect – spoken now mostly by the elders – came to exist by merging several German dialects hundreds of years ago, when craftsmen and miners from German-speaking countries arrived here.

Even today there is a school for minorities in the village where children learn German from the first year on.

In the past, 90 to 95 percent of local inhabitants were of German ethnicity; now it is less than 15 percent. Their number declined mostly in the 20th century.

“The Beneš’ decrees changed a lot,” Pleštinská says, “as well as the displacement of ethnic Germans – and some inhabitants were taken to Russian Gulags.”