A PERFECTLY preserved 14th century single-edged sword with a wooden handle has been found in a medieval cistern during an archaeological dig at Pustý (meaning Deserted) Castle near Zvolen in Banská Bystrica region. 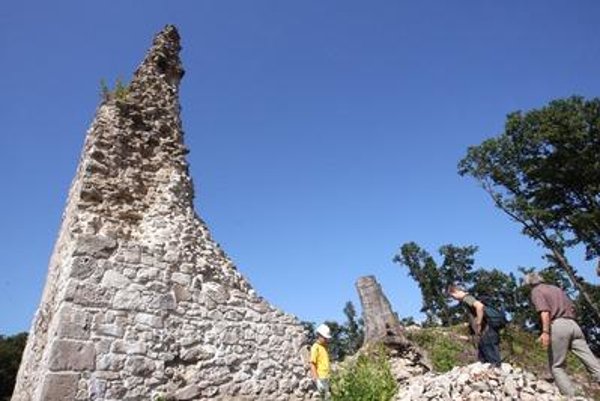 Works at the Pustý Castle have been ongoing for several years. (Source: Sme)
Font size:A-|A+0

The dig has been taking place on the castle hill since June. Around 60 people are involved – specialists, the unemployed and also students from central Europe.

“Aside from the sword, we also found a wooden structure in the bottom of the cistern that served some purpose in the functioning of the cistern, along with parts of furniture, a whole jar from the 14th century and other items,” the head surveyor Ján Beljak told the TASR newswire on July 23.

The castle cistern dig in Pustý Castle’s upper ward is one of the most technically difficult in Slovakia. The depth of the cistern was eight metres before the survey, but two weeks later it is a metre deeper.

“In addition to the incredible heat we’re also struggling with water in the bottom of the tank, which is being pumped out continually,” Beljak said.

The work this year is focused on the last non-reconstructed western wall of the lower ward and adjacent castle palisades, which are among the most valuable examples of medieval castle architecture in Slovakia.