A NEW community centre was opened in the town of Bystrany, Košice Region, on July 28, with Government Proxy for the Roma Communities Peter Pollák in attendance. 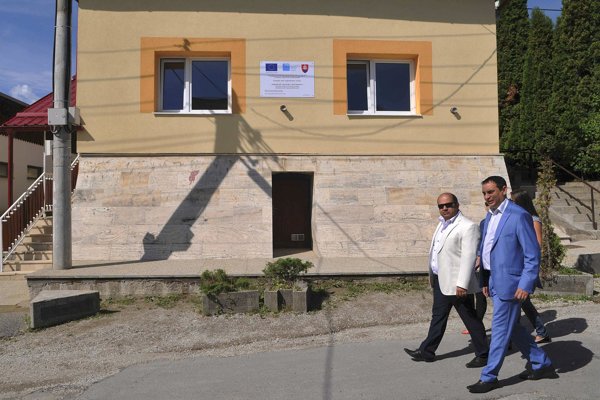 The reconstruction of the former town hall was financed from European Union structural funds. Similar community centres have recently been opened in Spišské Podhradie and other villages in the Spiš area will follow, such as Veľká Lomnica, Rakúsy and Toporec (all in Prešov Region).

“We’re finally using European resources efficiently and responsibly,” Pollák said, as quoted by the TASR newswire. “We’re opening a total of 60 community centres whose purpose is the integration of the Roma, and that's an example of how to use European Funds to tackle the Roma issue in Slovakia.”

More community centres should be financed from the funds allocated for the 2014-20 programme period – a total of 120 in municipalities with larger proportions of Roma. Slovakia is to receive €30 million for this.

The country obtained around €12 million for the construction of the first 60 centres in the previous programme period.

“A community centre is a tool for working with Roma children, youth and adults more intensively, systematically and daily,” said Pollák, who once worked in a community centre himself and has set them up, as quoted by TASR. “In these centres they’ll find sporting, educational, cultural and awareness activities, and with them we’ll be able to prepare Roma for the labour market, for instance.”

The first wave of community centres in Slovakia appeared in the 1990s, supported by foundations and civil associations, but many of them have ceased to exist. The new ones are being established with state support. Key partners are municipalities, which provide a guarantee that the centres will not be closed down when the programme ends, said Pollák.

The activities of local authorities will be very important in the new programme period. They have to show greater responsibility, willingness and courage to address the problems in their communities, according to the proxy.

“The country will give them a helping hand in this,” Pollák went on. “I’m an optimist, and I believe that such a community centre will provide services for 20-30 years. It is a proviso for us that the municipality continues to run the centre for a minimum of five years after the end of the project’s financing.”

In Bystrany, the old town hall building was reconstructed at a cost of €69,000, €59,000 of which was provided from subsidies and the remaining €10,000 from the local council’s budget. Community residents and social service employees participated in the construction work, which took around a year, during which the roof was replaced and the building insulated. Bystrany also plans to buy equipment for the centre.