Špania Dolina could be called “lacey”

TRADITIONAL bobbin lace from Špania Dolina belongs inseparably to this mountain village, just as mining traditions. The craft, although now made only by several, mostly elderly women, is admired by people in Slovakia as well as abroad. 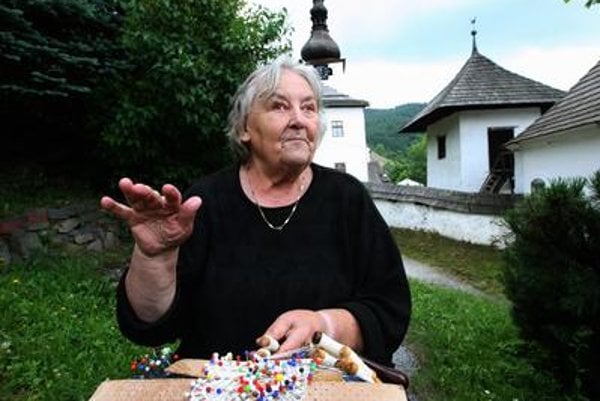 Its origin dates back to the 16th century and was influenced, to a great deal, by German colonisation. In 1883, there was even a boon-lace school established here; however, it operated only until 1909. But young girls learned the skills mainly from their mothers and grandmothers. It used to have various uses: from fringing tablecloths in homes and on churches’ altars, brides were decorated with them and bonnets – sometimes laces even garnered the festive attire of men, although quite rarely.

One of the women whose hands can truly “make miracles” is Františka Šnágerová, aged 81, whose house stands on a slope, just opposite the entrance to the church and chapel of St John of Nepomuck. Naturally, her bobbin lace adorns also white place settings in the chapel. She even helped to save the whole chapel when, after a heavy snowfall, the roof threatened to cave in and collapse. Famous biologist Miroslav Saniga, who works in nearby Staré Hory, arranged not only for wooden shingles but also for craftsmen to repair it.

Šnágerová loves summer, when she often takes her implements outdoors and willingly demonstrates her skills to anyone interested. Skillfully, she moves the wooden sticks called kneple in local dialogue. The flicking of kneple is called the most beautiful music of Špania Dolina. 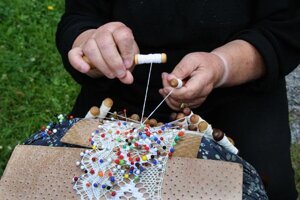 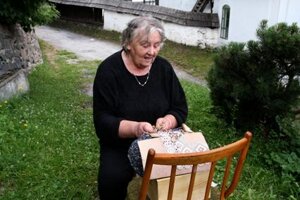 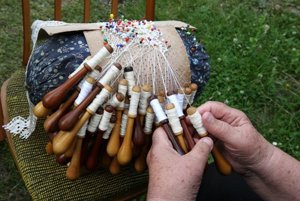 Bobbin lace has a big tradition in Špania Dolina (7 photos)

“We were five children; and both mum and grandma trained us to work hard,” Šnágerová says. “As a small girl I always admired their accurate work; I tried it, too, and gradually I somehow learned it.”

The skill of local women lies in them not using any designs or drawn drafts. “I always figure out what I want to make, and then it goes as if by itself.” However, it is not easy to stick the pins into each hole, and to work carefully with kneple to get the desired form.

Everything she works with is original: the stands, the pillow with sawdust particles, and kneple – made by a local carpenter. Šnágerová, whose aunt even used to travel abroad to sell the bobbin laces – bringing, however, food like lentils and beans instead of money – has letters of thanks from many foreigners, from all over the world.

To train followers who could continue the tradition, Holiday School of Traditional Techniques is organised, including this year.