Gas consumers to get cash rebate before elections 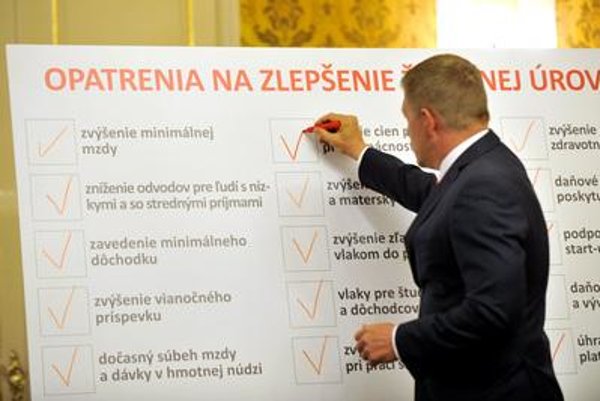 Prime Minister Robert Fico calls these the last fulfilled measure from the so-called first social package, but his political opponents call it pre-election marketing. Energy and economic analysts see gas payment refunds as a not systemic measure, pointing out that the gas refunds put at disadvantage those without access to gas.

At first the Regulatory Office for Network Industries (ÚRSO) announced on July 29 reduction of cap gas prices by 3.91 percent on average for households and by 3.7 percent on average for small companies as of September 1.  On the heels of this announcement, Fico announced that the better than expected performance of the gas utility SPP, which returned under full state control last year, enables the cabinet to return people some their gas payments .

“We have decided that the Slovak cabinet, because it obtained additional revenues from the side of the SPP parent company, will return to either to the client of SPP or other alternative gas supplier, 6 percent of their annual payment for gas supplies,” Fico told the TA3 news channel.

The cabinet’s plans is to send gas refunds to households at the end of 2015 or at the beginning of 2016 in cash while it estimates that it will pay €47 million in total to about 1.4 million households. Households using gas only for cooking should receive €10 while those using gas for cooking, warming up water and heating will receive between €14 and €165 depending on their gas consumption. Households with large gas consumption, whom Fico calls poll heaters, will be excluded from this measure.

According to Fico, gas refunds have became feasible through SPP's strong economic results.

“We’ve acquired full control over SPP in terms of ownership relations,” said Fico as cited by the TASR newsire. “Seeing as the SPP mother company is governed well and sends also extraordinary dividends to the state, the revenues have exceeded expectations. Therefore, the decision of the cabinet has been made to ensure a double-digit drop in gas prices.”

Michal Hudec, analyst with Energy Analytics think tank, does not see the cabinet’s decision over gas refunds as having anything in common with the energy sector.

“It is exclusively a political instrument of the cabinet,” Hudec told the Pravda daily.

Peter Goliaš, analyst with the think thank INEKO, perceives gas refunds a mere pre-election measure. He, along with Martin Vlachynský, analyst with the Economic and Social Analysis Institute (INESS) also doubts a proper targeting of gas refunds as this measure applied actually on all gas users will lose its social character. Moreover, those who do not have access to gas are excluded from this measure.

“Paradoxically, many of the poorest do not have installed gas and thus the [gas] refund will not help them,” Vlachynský told the Denník N daily..

Critics also point out that when GDF Suez and E.ON held stakes in SPP, the household division was loss making and thus question the current good condition of SPP. There are also indications that late reduction of regulated gas prices by ÚRSO have contributed to a better performance of SPP and thus created room to finance the refunds.

Gas prices for households and small companies remain regulated in Slovakia, while ÚRSO sets the cap gas prices and thus responds to the development on the Slovakia’s regulated gas market.

“The office [ÚRSO] concluded that an intervention in the pricing environment on the domestic gas market was required because despite a cap set on gas prices and suitable conditions for price setting through free competition thus created, prices failed to match sufficiently the falling trend in the price of this commodity on international markets,” Jozef Holjenčík, head of ÚRSO explained the latest price reduction.

SPP Distribúcia, the company supplying gas to households and other end clients, has already announced a changed price list while other gas suppliers are monitoring the situation.

Energy analysts also point out that gas prices consist not only from the price of the commodity which develops on the basis of international and global gas prices, but include also various other tariffs while they see space for their reduction too.

According to Hudec, it is difficult to assess comprehensively the reduction of gas prices by ÚRSO because some items creating the final price are known only to the regulator itself, for example the price for which Slovakia buys gas from Gazprom.

Lenka Ferenčáková, editor-in-chief of Energia.sk, perceives th e announced reduction of the end gas price as of September as corresponding with developments on the market since November 2014.

"Since this time the gas price decreased significantly," said  Ferenčáková as cited by  TASR . "In the spring it stabilised and remained on the same level.”

The opposition assesses gas refunds as pre-election marketing and corruption.

“It looks like one-off pre-election measure, which does not need to be here next year at all,” said Miloš Moravčík, the deputy chair of the Christian-Democratic Movement (KDH). “People should ask themselves why Fico suddenly is preparing to send them money some weeks before the elections. It is another proof that corrupt practices are very close to the current cabinet.”

“The cabinet is now returning citizens tens of euros, but during more than three years [of its term] it has collected from them hundreds of euros via increased payroll taxes,” said Bugár.