THE OPPOSITION parties should make it clear even before the general election next year whether they plan to scrap measures contained within the government’s packages of social measures, Prime Minister Robert Fico said on August 5. 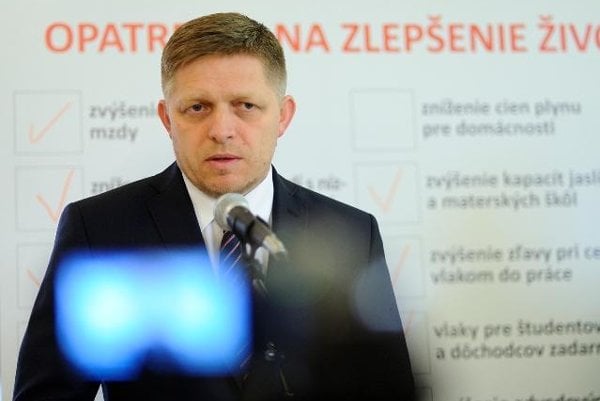 He was responding to comments made by the opposition that the cabinet is introducing the initiatives ahead of the March 2016 election in an effort to secure votes. In addition, the opposition parties are convinced that funds from higher amounts of tax revenue could be used towards more systemic measures instead. The government has already launched the implementation of the second social package which includes 15 measures.

“Go tell the Slovak public: Yes, we’ll scrap the packages, because they were introduced by the social-democratic government, they’re the bad ones, and we’re making it clear well in advance, because that’s fair,” Fico said, as quoted by the TASR newswire. "We, on the other hand, are telling the Slovak public that we’ll deliver on the second package 100 percent, and the third package will be unveiled in December, as promised before.”

The Prime minister also urged the opposition parties to come clean on whether they are actually planning to increase the minimum wage or boost the capacities of nursery schools. He stressed that the social packages are funded via higher amounts of tax revenue, from the fight against tax evasion and from Slovakia’s higher GDP growth. However, he refused to admit that the money to finance them would be collected thanks to higher taxes or levies, and that the social packages would deepen the public finances deficit or public debt.

The social packages are part of the ruling Smer party’s election campaign, when money gained from higher amounts of tax revenue could be used towards systemic measures instead, Freedom and Solidarity (SaS) and the Christian Democratic Movement (KDH) stated on August 5. KDH maintains that the packages are intended to cover up social problems and low living standards on the back of a high jobless rate and deepening regional differences. KDH chairman Ján Figeľ also said that his party has been advocating some of the measures for several years now, such as reducing VAT on basic foodstuffs and measures focusing on families with children. At any rate, a number of the measures will lack effect and are non-systemic, he added.

“Citizens will receive mini-packages, while packages worth millions of euros in the form of incentives, support and guaranteed profits from overpriced tenders and transactions are being sent to letterbox companies, financial groups and oligarchs in the Bahamas, Cyprus and other exotic locations,” Figeľ said.

SaS contributed by saying that even half of the money received in higher amounts of tax revenue would suffice to introduce a 17 percent flat tax rate for both individuals and companies. The money would easily be enough to introduce vital systematic measures aimed at improving the business environment, health care and education, as well as consolidating public finances, according to SaS’ politician Eugen Jurzyca. Jurzyca also rejected claims that the governmental policies do not translate into a higher deficit. “Actually, the deficit in 2014 was higher than in 2013, and the deficit for 2015 will only be reliably calculated after the general election in 2016,” said Jurzyca.

Social packages include some non-systemic measures that are not transparent in whom they are meant for, Mist-Híd’s chairman Béla Bugár said for the SITA newswire. However, he added that they also contain some measures that the opposition has already been proposing for some time but rejected by Smer, as “PM Fico, unfortunately, has not focused on improving the living standards of people for the past three years, but rather on financially securing cronies of Smer, as for example in the case Juraj Śiroký’s Váhostav”, according to Bugár. His party will not be against lowering VAT for foodstuffs, Ivan Švejna of Most-Híd said, but at the same time he slammed the decision to reduce the VAT only on some selected items.