THERE surely are events involving Belgian artists and performers taking place in Slovakia, but not that many bringing such a huge troupe as the Dance Theatre Aglaja. 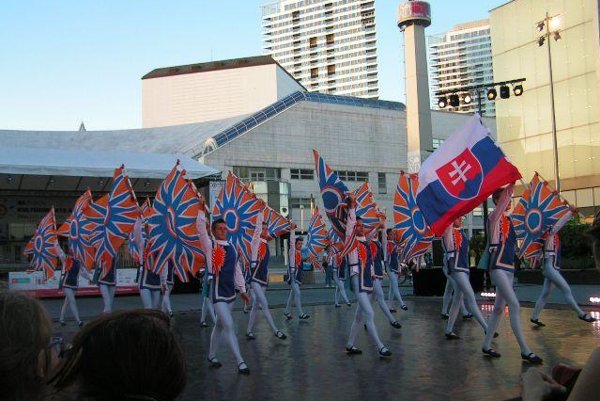 The group from the city of Brugge made a stop in Bratislava during its tour around 20 places in 12 European countries, marking the 50th anniversary of its founding. Its founder, Jan Dewulf, still created all the choreographies performed on the evening of July 26 at the Eurovea square near the Danube river by boys and girls. The performance was part of the Summer of Culture in Bratislava 2015 festival.

The dancers have no previous training when they come to Aglaja, manager Stefaan Franco said for The Slovak Spectator. Youths about 12 years old are accepted and then trained – anyone willing to train twice a week and go for tours – and after about one year, they start performing. “They usually stop aged 21 or 22, after they finish their studies,” he explained.

After a spate of heat waves, the weather was just fine on that evening for an outdoor performance – not too hot, nor too cold, and just enough wind to make the flags wave obediently, without tearing them from the dancers’ hands.

The event started an hour later than originally scheduled, but those who were patient enough to stay, could enjoy a series of different choreographies to all kinds of music, from well-known classics to some (not any lesser-known) evergreens.

Franco said that they stopped in Bratislava on their way back from Greece where they had a warm response, dancing in front of the National Archaeological Museum in Athens. (Hopefully, they were smart enough to skip at least the piece where boys wave flags of the European Union, plus one flag of the due country.)

Aglaja – the name comes from Greek mythology, which may have contributed to their success in this country – wanted to return to the Slovak capital, as they have already performed here once, several years ago; it was also an outdoor, but more centrally located performance.

“In Belgium, the audience is cooler, more reserved; while here, there is much more interaction,” he summed up. 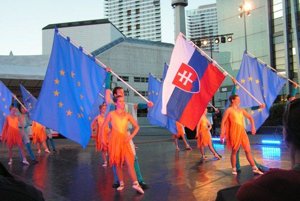 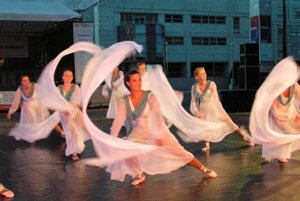 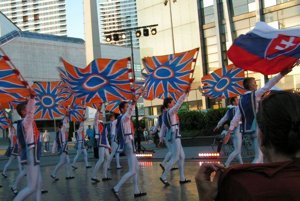