How Slovakia lost a Bernini 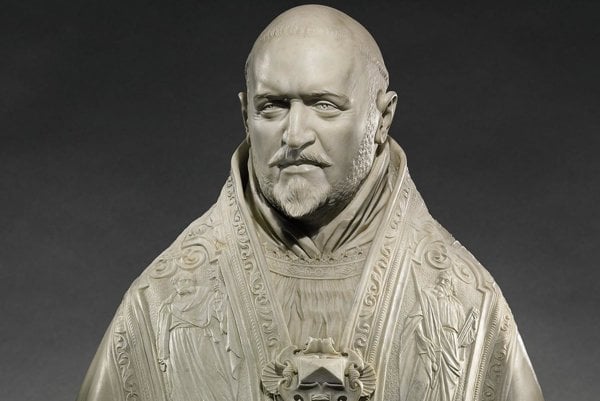 IT MIGHT have been Slovakia’s Mona Lisa drawing tourists, but after Slovakia and its art experts failed to recognise that a pope’s bust from the art collection of prominent Slovak artist and art collector Ernest Zmeták was a work by great Italian Baroque sculptor Gian Lorenzo Bernini the bust left Slovakia, with the blessing of the Slovak Culture Ministry and now is proudly exhibited at the J. Paul Getty Museum in Los Angeles.

“That such a famous and important work by his hand should be rediscovered and become acquirable by a museum today is an extremely rare and remarkable event,” said Timothy Potts, director of the J. Paul Getty Museum as cited in the museum’s press release. “This portrait of Pope Paul V takes its place at the Getty Museum as one of our most important and beautiful sculptures of any period or genre.”

The course of events

Heirs of Zmeták offered the marble bust for sale, considering it a work by an unknown Italian artist, along with other works of art via the Slovak auction house SOGA; there were two attempts to sell the bust. According to Zmeták’s heirs, the bust became part of his fine art collection sometime at the end of World War II and it remains unknown how, from where and for how much Zmeták acquired the bust. It is believed that even Zmeták, who died in 2004, did not know that the work was by Bernini.

First SOGA offered the sculpture for €47,000 in December 2013 as a pope’s bust by an unknown Italian artist, but it was not sold. In September 2014 SOGA tried to auction it again, this time for a reduced price of €24,000. The second auction also did not fetch a new owner. Only afterwards, an art collector showed interest and bought the bust directly via SOGA for the auction price of €24,000. The bust was later sold via London’s Sotheby’s to the J. Paul Getty Museum for a reported $30 million.

Based on information that Bernini’s bust of Pope Paul V was auctioned in Slovakia as the work of an unknown author for €24,000, only to be exported from the country and then sold by Sotheby’s to the Getty Museum in Los Angeles, Culture Minister Marek Maďarič ordered a probe into the case and filed a criminal complaint on suspicion that the people involved in exporting the piece could have known its real value and that persons assessing heritage values of a work of art could have acted in defiance of related regulations. At the same time Maďarič has ordered a ministry commission to examine the export of the bust. The ministry claims that if the commission comes to the conclusion that the law was violated, the export permit can be scrapped and lawyers could then begin looking into the possibility of returning the bust from the United States.

In the meantime, the Culture Ministry sacked a state counsellor who was responsible for preparation of permissions for temporary and permanent export of works of cultural value and who was not able to explain why she changed in a letter for the commission the description of the sculpture from ‘the bust by Gian Lorenzo Bernini’ to ‘the bust after Bernini’, the SITA newswire wrote. Reportedly a French art collector living in Bratislava, Clément Guenebeaud, who bought the bust from SOGA, wrote in his application that it is probably a sculpture by Bernini with the possible value of £5 million (more than €7 million).

The culture minister also recalled members of the commission after they were not able to explain why they did not ask for an expert opinion by an authorised expert but decided only on the basis of the fact that SOGA was auctioning the bust as a work by an unknown Italian sculptor. Maďarič also sacked the head of the cultural heritage section whose powers included issuing permissions for permanent exports.

Apart from experts of the Culture Ministry, SOGA also became a target of criticism, facing accusations that its experts failed to recognise that the bust is not a period copy but a genuine work by Bernini. SOGA argues that it is not a scientific institution and that it does not have a permanent team of experts and that it resolves expert issues by inviting external experts and consultants. According to it, such an approach is suitable for most situations except a situation when a work exceeding the ‘level’ of a regional auction house occurs.

“This has exactly happened in case of the pope’s bust,” the SOGA auction house writes in its response on its website, adding that it was Július Barczi, who prepared the related part of the auction catalogue. At that time Barczi was SOGA’s employee and met expert requirements as he was dealing with Zmeták’s collection over the long term.

SOGA also argues that the bust was known to the expert public while it became even more intensively known since the 1980s when it was catalogued within a plan of granting Zmeták’s collection to a gallery in Nové Zámky.

“However, nobody – even the exceptionally erudite expert of Italian art Ernest Zmeták – as well as several gallery experts dealing with his collection had not articulated even a hypothesis... that this is a work by Lorenzo Bernini,” states SOGA, adding that it is apparent that Barczi respected this state of knowledge.

SOGA also recalled that as there were two attempts to auction the bust, the bust was exhibited in its premises for almost one year, published in auction catalogues as well as on the website of the auction house but that nobody from the Slovak expert public pointed to an inaccurate or incorrect attribution of the sculpture.

SOGA has already approached three of Zmeták’s heirs with an initiative to obtain for them financial compensation from those who obtained millions of euros from the museum for the bust, the Pravda daily wrote.

Dušan Buran, curator of the Slovak National Gallery sees a coincidence of several circumstances behind the whole incident.
“Primarily nobody in Slovakia would expect a work of art of such a ranking,” Buran told the Denník N daily, adding that as a consequence the SOGA auction house was too cautious when assessing the bust.

According to Buran, there is only a small group of experts in the world able to issue a meritorious stance in a matter of Bernini’s work.

Bernini was a towering genius of his age, acknowledged in his lifetime and ever since as the most versatile, inventive, and talented sculptor since Michelangelo, the J. Paul Getty Museum states on its website.
The posthumous life-sized marble sculpture was the first official papal portrait that Gian Lorenzo Bernini (1598-1680) created. The Italian artist sculpted it when he was only 23 years old. As Tony Sigel, a Bernini expert at the Straus Center for Conservation at Harvard told The Los Angeles Times, an early work by Bernini is especially significant because the young artist did not delegate as much work to assistants as he did at an older age.

Commissioned by Bernini’s famous patron, Cardinal Scipione Borghese, the bust was part of the Borghese family’s well-known collection until 1893 when it was sold at auction, but as work by Bernini’s rival Alessandro Algardi. There are some indications that it was acquired by an unknown art collector from Vienna. In 1916 the bust was again attributed to Bernini but then it was considered lost, the Sme daily wrote.

Until now, art historians have only known the object through a photograph taken for the 1893 auction catalogue and a bronze version cast by Sebastiano Sebastiani in 1621-1622 as well as original records of its commission.

It survived through all these centuries in perfect condition, according to the J. Paul Getty Museum.