BRATISLAVA Castle is hosting a travelling exhibition showcasing the most significant archaeological finds from the era of the Great Moravian Empire, the TASR newswire learnt on Thursday from the Museum of History, part of the Slovak National Museum (SNM), which is organising the event. 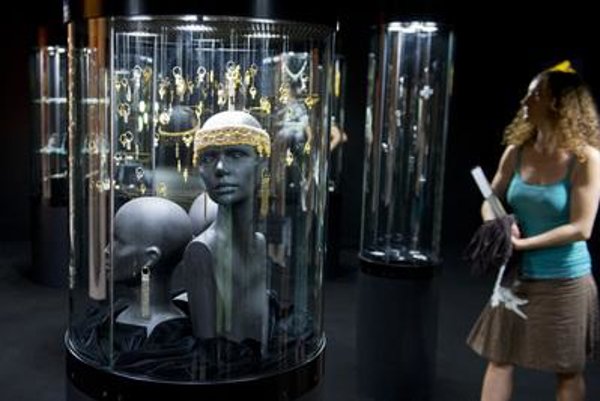 The Great Moravian Empire, which included part of the current territory of Slovakia, came into being in 833 before collapsing most probably in 907.

The castle’s basement area is now home to 1,400 rare archaeological finds on loan from thirty institutions from the Czech Republic, Slovakia, Austria and Poland. These include extensive collections of precious gold and silver jewellery, armour and weaponry as well as works of art. The treasure of a Byzantine merchant found by a Slovak farmer in 1937, ranks among the most unique artifacts.

Cutting edge models made of resin castings that show Great Moravian churches and other structures are an additional element in the exhibition, as are 3D visualisations of items made of precious metals, bones and iron, TASR reported.

The exhibition called ‘Great Moravia and the Beginnings of Christianity’ will continue until November 1 with support from the Czech and Slovak Culture Ministries.

“This project of the Czech Republic is to date the biggest presentation of history and life during the era of the Great Moravian Empire,” said Branislav Panis, director of the Museum of History as quoted by TASR. “It has come to Bratislava after previously being hosted by Brno and Prague [in Czech Republic], and at the same time archaeological finds from beneath Bratislava Castle have been made available to the public for the first time.”

Pavel Kouřil, Director of the Czech Academy of Sciences’ Archaeological Institute praised the exceptional character of the exhibition.

“The first exhibition on Great Moravia took place in 1963, and it attracted a great deal of attention in European cities,” Kouřil said, as quoted by TASR. “It showcased the first state entity in central Europe. We’ve made a number of significant finds since then, so we have prepared this exhibition.”

There has never before been an exhibition on Great Moravia of such extent and quality, according to Luděk Galuška of the Slavic Archaeology Centre at the Brno-based Moravian Museum, who prepared the exhibition along with Kouřil.