You can taste Chardonnay almost everywhere in the world, but the Devín, Dunaj, and Milia varieties you can taste only here in Slovakia.

Related: Overview I Varieties I Wine label I Tokaj I History
Font size:A-|A+

The original version of this article was prepared for an edition of the Spectacular Slovakia travel guide and was published in the travel guide Slovakia.

There’s a certain irony in saying that Slovakia is considered among the so-called new wine-producing countries of the world.

A helping hand in the heart of Europe - Slovakia travel guide.

Winemaking in these parts has a history dating from the 6th–7th centuries BC. Yet the comparatively low awareness of Slovak wines abroad is largely a result of its patterns of consumption: almost none of the wine makes it past the keen wine-drinkers of Slovakia itself. That largely means that if someone wants to try Slovak wine they need to come here to do so.

The recognition of Slovak wines has improved rapidly in recent years, as proven by recent results in international competitions.

​​When Bratislava hosted one of the world’s most prestigious international wine competitions Concours Mondial de Bruxelles (CMB), its president Baudouin Havaux said that the tasters discovered a region which is maybe less known but has [a lot] to offer. He lists Slovakia alongside places like Chile, New Zealand and South Africa as emerging nations, separate from countries most noted for a tradition of wine production such as Italy, Spain and France.

According to CMB President Baudouin Havaux the tasters discovered a region “which is maybe less known but has [a lot] to offer”. Havaux lists Slovakia alongside places like Chile, New Zealand and South Africa as emerging nations, separate from countries more noted for a tradition of wine production such as Italy, Spain and France.

“The time for a new wave, which will balance these two tendencies between traditional countries and the so-called new countries, has arrived,” said Havaux. “We see this development also in central Europe. And Slovakia is a notable example of this development where the quality of wine is really on a high level and keeps rising.”

“We here in Slovakia cannot afford to produce cheap, low-quality wines,” said Jaroslava Kaňuchová – Pátková, executive director of the Association of Grape and Wine Producers in Slovakia (ZVVS), adding that in this market, foreign bulk producers can beat almost any domestic producer.

There are new varieties among Slovak wine producers, which are specifically cultivated totap into the full potential of Slovakia’s climate and soil. These wines cannot be made anywhere else. 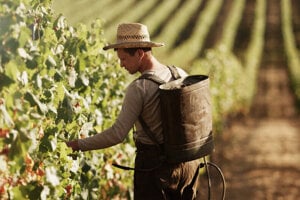 “You can taste Chardonnay almost everywhere in the world, but the Devín, Dunaj, and Milia varieties you can taste only here in Slovakia,” said Kaňuchová – Pátková. “This is how we can establish ourselves in the world. Devín and Dunaj are wines that are also harvesting success in world competitions.”

White Devín and Blue Dunaj are the most popular Slovak grape varieties among winegrowers. The use of Slovak varieties has been growing significantly in recent years.

“These two varieties occur in the portfolio of almost every Slovak winemaker,” Ľudmila Miškovičová from the Slovak National Collection of Wine told The Slovak Spectator. She estimates that, in total, Slovak grape varieties make up about 3 percent of the area cultivated as vineyards in Slovakia but that the use of Slovak varieties has been growing significantly in recent years.

The white Devín grape, a cross between the Tramín červený (Gewürztraminer) and Veltlínske červenobiele varieties, produces a green-yellow wine with a moderate spicy aroma, leaning towards Muscat. This variety, crossbred by Dorota Pospíšilová and Ondrej Korpás in 1958 at the Wine Research Institute in Bratislava, produces dry wines as well as naturally sweet wines.“They enthral with spiciness, fullness and perfect harmony,” Miškovičová said, adding that Devín, within its aroma and taste, reveals hints of dried apricot, dandelion honey and bread. 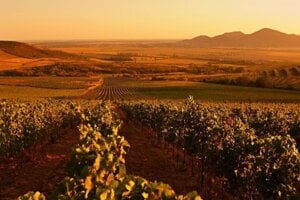 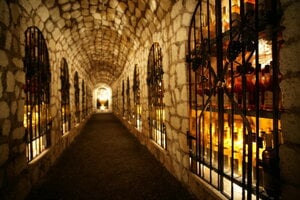 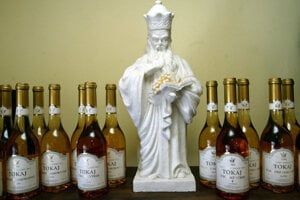 Wine in Slovakia (33 photos)
You have just exceeded the number of devices allowed.
Your active subscription only allows a limited number of browsers to access locked content.
To continue reading this article on this device/browser, please edit the list of registered devices in your profile settings here:
manage devices
You can read all about device management here.

Subscription provides you with:
Send the article by email
Close ad