HARD-working people living near the Roma community in the town of Bánovce nad Bebravou in Trenčín Region struggle to sleep due to noise their neighbours make until the morning hours. Many of those Roma do not even pay their rent. The town now plans to adopt a system that will force misbehaving people out of the town. 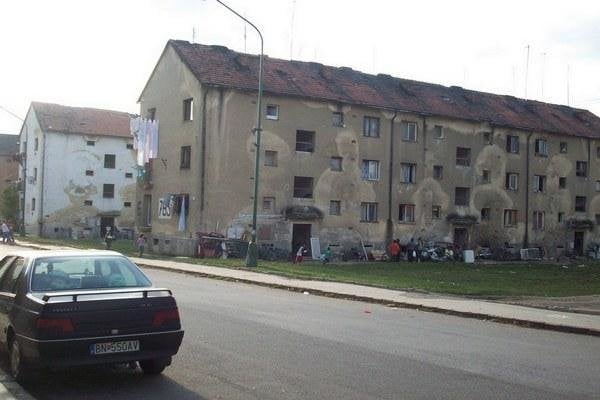 It is called the ‘three strikes’ rule, meaning that if a family breaks public order or house rules or does not pay rent three times the town will not extend their three-month rental agreement. The system will not take the form of official rules; it is rather the town hall’s policy, according to Bánovce nad Bebravou Mayor Marián Chovanec.

“We want to implement the principle of decent living and equality,” Chovanec told The Slovak Spectator. “So order will finally be restored. Therefore even those who are part of the Roma community and want to live decently will have a chance to be in such an environment.”

There are, however, better solutions than eviction, according to Jarmila Lajčáková from the non-governmental Centre for the Research of Ethnicity and Culture (CVEK), a think tank.  The problematic behaviour of the local Roma community is not their ethnic characteristic; rather it is the result of life in a ghetto and poverty, she added.

“I am sorry for their neighbours as I am sorry for those well-mannered Roma families living in this community because they are victims of the situation in which they live,” Lajčáková told The Slovak Spectator. “It is sad that the mayor hasn’t found a better solution than eviction because there are some.”

Chovanec stated that he was inspired by the town of Partizánske where the same system has been in effect since October 2011. Its mayor, Jozef Božik, says that inhabitants had to reconsider their behaviour and almost everyone pays rent thanks to it.

“This policy brought positive results in the area of protecting the rights of decent people and protecting property,” Božik told The Slovak Spectator.

Due to bad behaviour, damage to town property or long-term avoidance of paying rent, the town evicted 115 households in accordance with this rule. One block of flats suffered so much damage that it had to be torn down, Božik added.

Using this policy in combination with tearing down buildings and not constructing new flats, the town of Partizánske has forced out people it considers to be undesirable, according to sociologist Zuzana Kusá with the Slovak Academy of Sciences

“I still hope that someone in the prosecutor’s office will think about it because distorting public order is an unpleasant thing, but to punish people with a total loss of living [space] is more than inappropriate,” Kusá told The Slovak Spectator. “That’s what the law is about – the appropriate sanctions.”

The General Prosecutor’s Office has not received any complaints related to this town’s policy, the office’s spokesperson, Andrea Predajňová, said in response to The Slovak Spectator’s questions.

There could be cases when an entire family will suffer due to one misbehaved member but the difference in the number of those who violate rules and those who do not is quite big and the situation is unbearable, according to Chovanec. He added that he can attest to that as he was a postman and still lives close to the problematic area.

Such policies will force Slovak Roma to move abroad to countries where they have relatives. This is, however, not an in issue for the Slovak government, Kusá said.

There are other options

Recently, an increasing number of municipalities are adopting strict policies against marginalised people who do not pay their rent. However, it may not solve the problem and causes others. For example, when the municipal government evicted residents from some blocks of flats in the Roma ghetto Luník IX in Košice in eastern Slovakia, the evicted moved to the nearby forest and created a new settlement, according to Lajčáková.

“People should follow rules, there is no argument about that; however, they should get a chance to live in a different way,” Lajčáková said. “When municipalities cast them out it will solve nothing. Those problems are similar in all ghettos and it doesn’t matter if those are Roma or other minorities.”

For example, some municipalities adopted a system of so-called continuous living and it turned out to be a good idea. It means that people who pay their rent regularly will get a chance to move to a higher standard flat. The municipality can also receive state aid for the living space instead of the inhabitants, which would prevent them from not paying rent, according to Lajčáková.

“In my opinion when there is restriction there should be also some other alternative provided,” Lajčáková said. “But the municipality has to be active in that.”

The Government Proxy for Roma Communities, Peter Pollák, plans to visit both Bánovce nad Bebravou as well as Partizánske to discuss the issue. His office told The Slovak Spectator that it is aware that every citizen has to act in line with the law and municipalities have the right to enforce the law. However, the office agrees with Lajčáková that it should also utilise ways other than evictions.

“When we will see the options for rational solutions then why not,” Chovanec said, adding that his plans, however, are limited by the town’s coffers.