THERE are several such festivals in Slovakia, but the Bratislava Organ Festival (BOF) is unique in it focus on both the history of the instrument and stretching the bounds of organ moving forward. 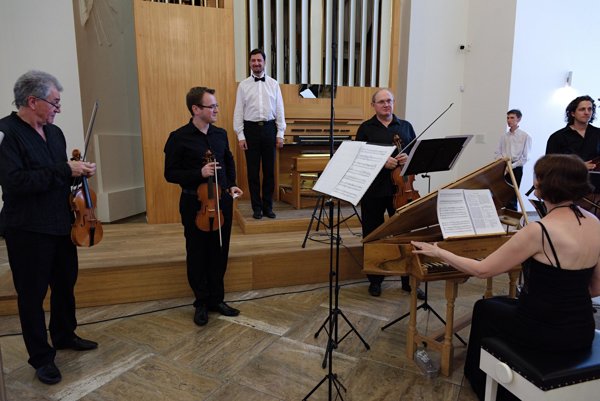 Both took place in the music hall of the Bratislava Castle and both were packed, despite agonising heat. The first, on July 19, brought festival’s Artistic Director Marek Vrábel and the Musica Aeterna ensemble performing the works of two composers who celebrate their 330th anniversary this year – Handel and Bach. The repertoire was a risky one as the organ at the Bratislava Castle is relatively new(1976) and not tuned to match ideally with the old instruments. The heat, Vrábel said, also risked breaking strings. Luckily, the show came off without a hitch.

“The first impulse for this concert was social,” Peter Zajíček, artistic director of Musica Aeterna told The Slovak Spectator. “We met among organists and discussed the possibilities of playing old string instruments with organ. In Slovakia, we have many historical organs which bear the imprint of the epoch – and people today hear the same sound as those who lived centuries ago. With Marek Vrábel, we discussed this option and due to the high tuning of this organ – and the thickness of strings, we considered how it could be done.”

“Organist players are often lonely – while feeling totally free at the same time; but this cooperation might break up the habitual perception,” Zajíček continued. 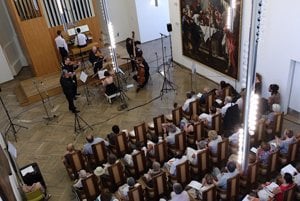 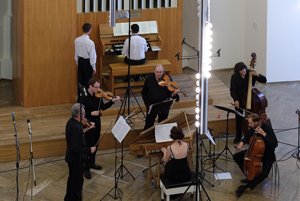 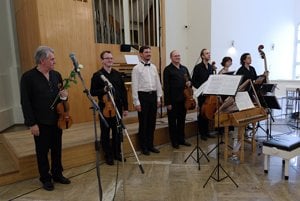 The second concert, on July 21, was a different cup of tea: Ján Vladimír Michalko, professor of organ at the Bratislava Academy of Performing Arts, along with accordionist Boris Lenko, played the works of Johann Kuhnau, Cesario Gussago, Aurelio Bonelli, (modern Slovak composer) Ijla Zeljenka, Giuseppe Guami, Padre Antonio Soler and Lenko’s Arwa. Moreover, the two musicians were placed across the hall form each other, with Michalko sitting at the organ downstairs, and Lenko on the balcony, in the opposite corner of the room.

Lenko revealed that the idea to combine organ with accordion came from the festival’s manager, Andrea Soročinová. “The compositions were originally meant for keyboard instruments, as thus could be played by any of them, in any combination,” Lenko said. “We didn’t have to arrange or adapt anything.“ 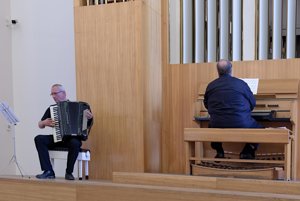 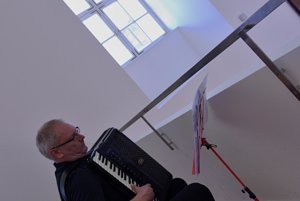 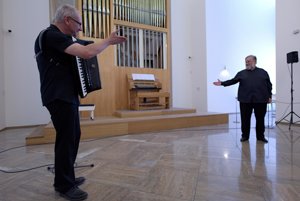 The accordionist who plays, apart from classics, in various cross-over projects touching on ethno, Klezmer, and jazz music, added that it was very difficult to play across the whole room as he could not rely on his musical ear. It was even harder with the room full of people, Lenko said. For visitors, however, the combination of instruments (not to mention the unusual experience of hearing but not seeing the musician) was intriguing. Michalko told visitors that spontaneous playing of several different keyboard instruments used to be quite common in the past.

Summing up the fourth year of the renewed organ festival in the castle’s music hall, Vrábel said he was pleased that there was one concert – the initial one – on Slovak Radio, and that the possibilities of the castle’s organ were explored in both the way of early music (like Bach transcriptions) and in a modern repertory.

As for the plans for next year, Vrábel said that they would like to preserve the successful points and series, adding one concert of “something traditional with something non-traditional” and also one focusing on exclusively Slovak music.