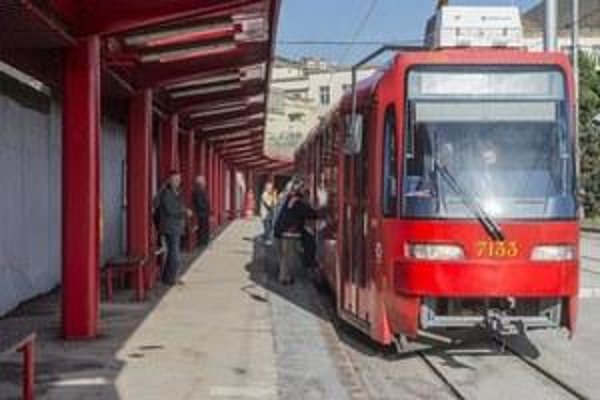 GAPS in the public transport system have troubled Bratislavans and visitors for years. Older residents recall plans to building a subway system, which though launched was never completed. But city officials would like to use 80 kilometres of existing railways within the city as a partial alternative and build seven new integrated passenger transport terminals (TIOPs).

“Currently we have been working on the project of the seven TIOPs on the territory of Bratislava,” Tatiana Kratochvílová, the main traffic engineer of Bratislava, told The Slovak Spectator.

The new TIOPs will be built on the railway corridor West-East rail corridor in the Devínska Nová Ves, Lamačská brána, Patrónka, Mladá garda, Trnávka, Ružinov and Vrakuňa districts. All the stops will ensure the ability to transfer to another transport mode with tram lines to be extended to the Ružinov and Lamačská brána stops.

The project is included in the framework of the Integrated Transport System of the Bratislava Self-Governing Region (IDS BK) and approved by the European Union. The Slovakia’s rail network company Železnice SR will begin to build TIOPs by 2018 at the earliest.

Kratochvílová noted that concentration of the stops on existing rail links along with the modernisation, improving the transport performance and reconstruction of existing station premises should make the railways within the city more attractive.

“The improvement of the railways performance is required in the modern era with the transport, environmental and social importance,” said Kratochvílová.

Officials of Bratislava Self-Governing Region (BSK) see the project of the new TIOPs as an option to shorten travel times particularly at the rush hours.

“The project will be beneficial primarily for the urban traveller,” Iveta Tyšlerová, spokeswoman of BSK, told The Slovak Spectator, but added that commuters from outside the capital may opt to drive to the city before continuing the final part of their journey by train.

Experts hope the improved services could ease car traffic in the city centre.

“However it must be built supporting parking lots and appropriately set up the parking policy,” Ľubomír Palčák of the Research Institute of Transport told The Slovak Spectator.

At the moment the first supporting parking lot has built next to Lamačská brána where commuters and tourists will be able to park the car and continue to the city with public transport. Parking lots are also planned in localities like Nové Košariská, Ivanka pri Dunaji, Pezinok and Zohor.

Milan Perný from the Faculty of Electrical Engineering and Information Technology at the Slovak University of Technology in Bratislava pointed out that if the parking lots, new stops, interconnection between the transport modes and integrated transport system do not exist, it will not work properly.

“It is a complex jigsaw of things that fit together but by themselves have no meaning,” Perný told The Slovak Spectator.

Perný added that the responsible persons have prepared the strategic comprehensive paper for 30 to 40 years that has indicated where, when and how the people in Bratislava travel. New stops will disrupt the continuity of the current regional and long-distance rail transport as some trains will stop more frequently than others.

According to state-owned passenger rail carrier Železničná spoločnosť Slovensko (ZSSK), after the construction of new stops within the capital city will be necessary to modify the train traffic diagram especially of the passenger and regional express trains (REX).

ZSSK sees IDS BK with new train stops as the opportunity to solve commutation from the wider surroundings but only in the case if whole public transport works on joint tickets.

“Integration can be meaningful only if it is possible to travel by different transport modes on a single universal ticket,” Morháčová said.

Tyšlerová also added that it is appropriate to replace current bus fleet coming from small towns with trains.

“It is necessary to build infrastructure with the ability to immobilise suburban buses, ensure the comfortable and safe mode transfer and provide the necessary facilities for passengers and stuff,” Tyšlerová said.

The construction of TIOPs and thus the involvement of local railways to MHD in Bratislava should, according to experts, resolve a number of problems appearing in all the major cities in Slovakia.

“The speed of transfer (by MHD) is mostly influenced by individual cars,” Palčák told The Slovak Spectator, “because the segregation from other transport modes is provided only in the case of tram (partially) and rail traction.”

Perný confirms the need to increase the speed of public transport connections.

“Slowdowns are generated mainly due to the dense network of tram stops that are not fully utilised,” Perný said. “A problem arises in Petržalka where the new track crosses approximately five roads.”

“Modernisation of segregated tram tracks reduces the travel time,” Kratochvílová said, “that we cannot say about bus and trolleybus transport besides a few exceptions.”

Gateway to the city

At present Bratislava’s main station handles not only urban and suburban but also long-distance rail transport. Its location and accessibility to public transport allow get quickly to the city centre and other districts.

The total reconstruction has already suspended since 2009. The current city leaders have decided to enhance the station area this summer.

“The appearance of the station and its surroundings is a bad image for Bratislava,” Kratochvílová told The Slovak Spectator.

According to Tyšlerová, such a TIOP has to comply with all aspects of accessibility, cleanliness, safety and other features of public transport quality whereas arranges a large exchange of passengers between different transport modes.

“It is necessary to make not only partial measures but also the whole reconstruction in the near future in order to meet all the requirements and expectations of regular commuters and tourists,” Tyšlerová said.