THE TENTH year of the scholarship programme Divé maky / Wild Poppies that supports young talented Roma will culminate as usual with a typical Roma feast, Bašavel or Gipsy Bashavel, which shows what the gifted children have learned. 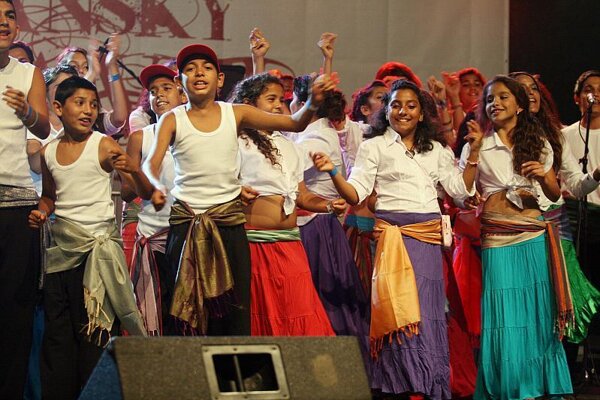 On August 16, between noon and 22:00, the programme will include theatre, dance workshop (by CreDance group and their students), visual art, Roma cuisine and lots of music.

Popular Czech band Terne Čhave, who combine folk and world music will be playing too, as will the children from Divé maky programme, together with singer Agata Siemaszko, violinist Barbora Botošová, percussionist Eddy Portella, and CreDance. Slovak Roma band Sendreiovci will join forces with pop/rock band Para. Theatre focusing on Roma motifs will be directed by Naďa Uherová; and the queen of traditional cuisine will be Zdenka Mahajová who will also teach enthusiasts how to cook some Roma dishes. Movies with Roma themes will also be screened; and there will be a Literary Club including Roma authors.

For visitors, there will be an artistry, puppeteering, a hand-made class and a circus workshop.

The first year of the multi-genre festival took place in 2009 and since then, it has moved places several times but always to an outdoor venue. “Of course,  the main reason for moving to the Old market hall was financial,” Mária Potočárová Rybaričová of Divé maky told The Slovak Spectator. “Bashavel was very popular as an open air festival at the Červený Kameň castle. But it is very demanding and very expensive. The Old market hall is an excellent alternative, located downtown and accessible to everyone, irrispective of the weather. There is a lot of space, a good backstage infrastructure, and the civic association around this site is a very good partner. Last year, at the Magio beach, the interaction with the audience was not so strong and there was not enough space for people to get involved and dance.”

We expect this space to secure a true Bashavel as it should be, Potočárová Rybaričová added, saying that the programme will be in Slovak but people from Divé maky will be dispersed around the market hall to offer information in English for foreign visitors.

Tickets for the event cost €7 (children under 10 free); and more specific information about the project supporting talented Roma can be found at www.divemaky.sk.