BISON living in an enclosure near the village of Lovce in the Zlaté Moravce district (Nitra region) need hundreds of litres of water along with shade and peace in order to cope with the current high temperatures, the TASR newswire found out on August 13 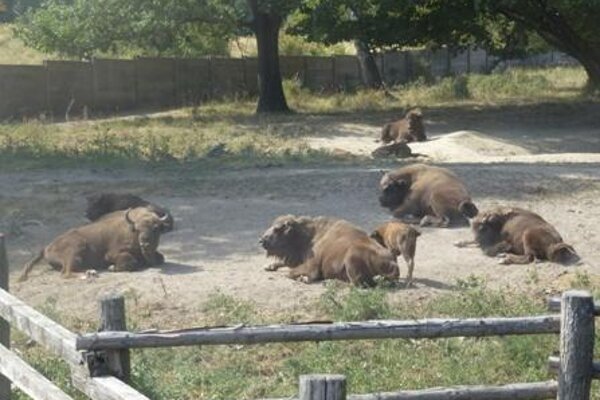 The European bison (Latin: Bison bonasus) is the largest European mammal. There are 23 of them in the enclosure.

Egilmes, a bull approximately weighing some 800 kilogrammes, is the largest in the herd. He was transported from Germany some years ago. The rutting season will begin soon, but this year there will be no fights involving the dominant male because the other males are not yet sexually mature.

“With these animals the rutting season is at the turn of August and September, so it’s beginning slowly,” said Eva Horniaková who takes care of the bison, as quoted by TASR. Not even the high temperatures have postponed it. Nature can’t be fooled.”

According to her, the huge animals are accustomed to lower temperatures, but they are coping well with the heat.

“One can say that the animals are more listless. They go into the shade of the forest right after feeding, and only leave it at feeding time,” she told the TASR. “They need to be given increased amounts of water. Under normal conditions, they drink twice a day, now it can even be as any as six times.”

The bison also use a pool, which is filled weekly with two to three cisterns of water, to cool down in.

“Mostly they just stand there in the water. They aren't the kind of animals that revive themselves by splashing water,” Horniaková said. “They cool down by rolling around in the dust, or they hide in the shade and move as little as possible. Their level of activity decreases so that they can maintain their temperature and not overheat.”