Horse-back riding: Where is Slovakia's Disneyland for horses and riders

Slovaks simply love horses and would die for them.

One of the most demanding horse races in the world, the 240-kilometre-long East European Endurance Ride, had its finish line in Šamorín, a town located less than 30 kilometres from Bratislava.

​The riders used to end at the premises of the local riding club JK Napoli, but the capacity became insufficient as the event grew. This is how the idea to create a completely new premises in the nearby village of Čilistov originated, explains Mário Hoffmann, chair of the board of directors of Istrokapitál, which invested in building the complex, and member of the JK Napoli.

“It is one of the most modern and most comprehensive riding precincts in central Europe,” Hoffmann continued.

The center opened in May 2014 and has been used to hold various horse-racing competitions. As the idea was to “attract riders of world quality”, the owners invited Arno Gego, one of the most eminent figures in international course design, to the project to design the riding area.

“It is like Disneyland for horses and riders,” said Brazilian rider Carlos Ribas.

According to Július Nosko from a riding club in Mlynica, at the foot of the High Tatras, horses are part of a deeply rooted tradition in Slovakia.

“Slovaks, Hungarians and Moravians simply love horses and would die for them,” said Nosko, who has ridden in several countries, including Switzerland, Germany, France, Austria and Great Britain.

He comes from a family devoted to horses. His grandfather, General Július Nosko, was one of the chief representatives of the Slovak National Uprising (1944) and a very good rider. 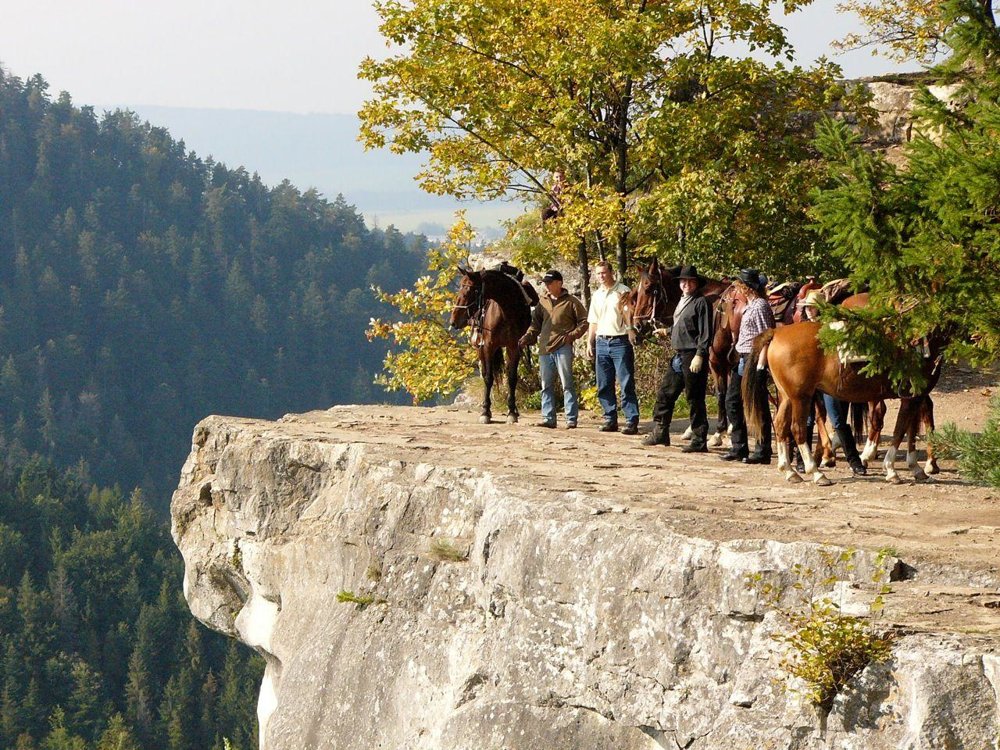 Taking in the view during a horse ride. (Source: Courtesy of Ranč u Trapera)

The Muránska Planina National Park offers a unique fusion of wilderness and human development via the breeding of half-wild horses, used mostly in the forestry industry. The local meadows are grazed by the Noriko Murano, a special horse whose breeding has been protected since 1997.

The free range of horses in Muráň is a natural part of the local ecosystem and helps keep the landscape in its current form. .

The origins of breeding horses in Muráň dates back to 1950, when a stud farm was established in Veľká Lúka, near Muráň. It focused on mountainous breeds for use in forestry and the army. The first horse bred in Veľká lúka was the Hucul, which was brought from eastern Slovakia. Later, based on the demands of forestry firms, which wanted stronger and heavier horses, the stud farm started crossbreeding the Hucul with other breeds, particularly the Fjord horse, the Halflinger and the Noriko.

The aim of this crossbreeding, which began in the 1960s, was to create a new breed of Slovak mountain horse. This horse was to have a larger size while retaining the qualities of the Hucul breed. There are currently some 300 horses in Muránska Planina. Tourists visiting the national park can find information about breeding in the tourist information centres and on information boards in Veľká lúka. It is also possible to arrange a ride in a horse-drawn carriage.

​ Kopčany by Francis Stephen of Lorraine, the husband of Maria Theresa, when he moved the stud horses to Slovakia from Saaralbe. In 1765, Maria Theresa declared the site a royal stud farm. In the early 18th century, Kopčany began breeding English thoroughbreds, beginning with about 70 mares and three stallions. Breeding was abolished in 1828, however, and the farm has since closed.

Today’s national centre of breeding is in Topoľčianky, a town 128 kilometres outside Bratislava. It is a state-owned company with one branch of its huge operation based in a complex of stables and paddocks near the local manor house. The entire organisation has around 570 thoroughbred horses, with about 100 foals born every year. It is the only centre in Europe that focuses on four breeds: the Arabian, the Lipizzaner, the Hucul and the Slovak Warmblood.

After World War I, Czechoslovakia was in need of stud farms. With the collapse of the Austro-Hungarian Empire, most studhorses were moved to Hungary and only low-

quality stallions remained in the territory of modern Slovakia. Moreover, since the

abolishment of the stud farm in Kopčany, there have been no other such facilities in Slovakia, said Emil Kovalčík of the Topoľčianky stud farm, which was founded in 1921.

Since 1993, Topoľčianky has also organised the international team racing including one, two and four-member teams. Topoľčianky hosted the 2013 World Championship in Pair-Horse, the first world championship in riding disciplines held in Slovakia, according to Kovalčík.

The Topoľčianky stud farm is visited by about 50,000 people every year, including official state visitors, foreign guests, and tourists. Visitors can see the horses, ride them, take rides in a horse-drawn carriage and visit the hippology exposition, which contains more than 3,000 artefacts on Slovak horse breeding.

Kopčany’s stud farm, however, still largely serves as a riding school and stable, with a current capacity of 30 stalls. It is also used by tourists on riding trips who need a place to stay overnight.

The history of horse-racing in Slovakia dates to 1814, when the first competition of Arabian horses took place in Urmín (today called Mojmírovce). Thanks to the initiative of politician and writer István Szechényi, the first horse race in Bratislava took place in 1826, near today’s Sad Janka Kráľa park.

Currently, about 20 horse-racing events take place in Slovakia, about 15 of which are held at Závodisko (Turf Direktorium), in Bratislava’s Petržalka borough. The facility was established in 1974, though regular horse-racing did not begin until 1979.

race, established in 1993. It takes place in mid-July and is ran with three-year-old horses, said Ján Valtýni, the racing secretary of Závodisko.

The riding area in Šamorín has already made it to the list of prestigious races, as several competitions are held there during the season, including national championships in show jumping, endurance races and horse racing. Moreover, the World Championship of Young Horses in Endurance Racing was held there in 2014. 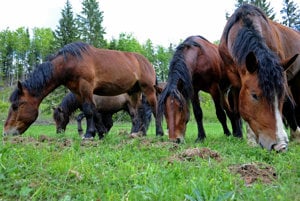 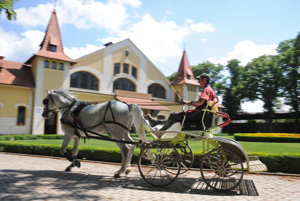 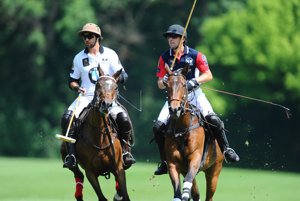 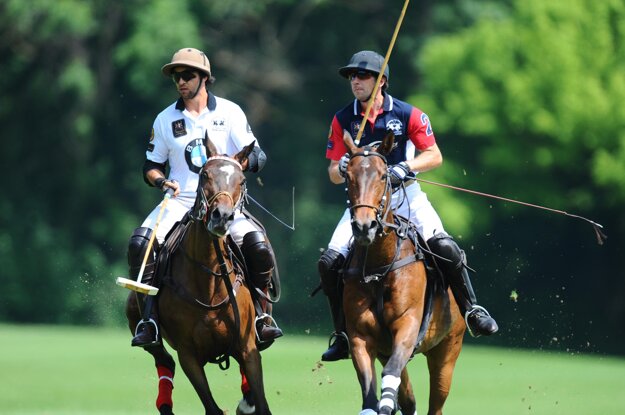 Slovakia also has its own polo team, whose origins coincide with the creation of the Slovak Association of Polo Riding and Corporex Polo Club in 2005. The Corporex club, is based in Hrubá Borša, about 40 kilometres from Bratislava, and led by Ladislav Agárdi. In 2010 the club changed its name to the Danube Polo Club.

“We are the only farm in Slovakia offering polo,” said Agárdi, himself an active polo player.

The riding club has a full-size training ground in Hrubá Borša, as well as two smaller training grounds, with a total of 12 polo horses and the necessary equipment.

The trainings are open to both beginning and experienced players. The Slovak polo team also attends various competitions, including some abroad, Agárdi said.

In 2012 Agárdi was even awarded by the Argentinean embassy for developing polo in Slovakia.

Riders in western Europe have a slightly different status than riders in Slovakia, according to Nosko, who says that Slovak riders personally invest more care into their horses and do not consider them as part of a business. In Slovakia, a horse still has a kind of emotional value: “People here respect horses and invest love in them,” Noko says.

​Our Spectacular Slovakia travel guides are available in our online shop.