POLICE officials claim that seven officers were injured in the Roma settlement of Zabijanec, in village of Rudňany in Košice Region, after around 200 Roma attacked them on August 1. But Roma residents of the village have different version of events and say the police attacked first. 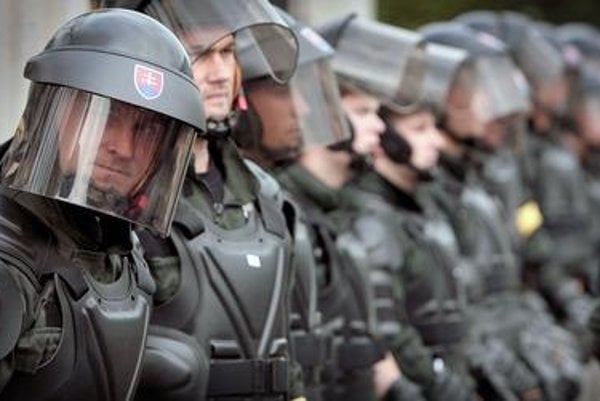 “They [police] took man who was sleeping only in his pants and didn’t know what’s happening to beat him outside,” said a local woman approached by Roma broadcaster Romed on August 4.

The broadcaster later published footage of its interviews on the internet.

The Zabijanec settlement is among the most underdeveloped ghettoes in Slovakia. It was built on the site of a former mine. Around 400 people live there in heavily damaged blocks of flats or hand-made chalets without running water.

On the night in question, police sent a patrol to deal with unrest following a report on the emergency line that several locals were engaged in a fight and that members of one family feared for their lives. Violence ensued and police had to call reinforcements, including the riot police. In total 22 police officers participated on operation concluding around midnight, Košice Regional Police chief Juraj Leško told the press conference on August 3.

Seven police officers were injured in an attack by locals, with all of these cases requiring medical treatment lasting between four and seven days. Nine suspects were arrested in the intervention including a 14-year-old boy. Several attackers were also injured, but they refused to be medically treated, according to police.

Police declined to comment on the claims of Zabijanec's inhabitants until the investigation is concluded.

The first police patrol arrived at the scene at 20:00 after being called by local Roma claming that felt endangered by an argument between neighbours. Earlier that day there had been a wedding celebration and some residents were intoxicated, according to both police and residents of the settlement. The stories of what happened next begin to differ.

“One car came here and [police officers] shouted at men to go home and stop making noise or they will be beaten,” Šimon Horváth, 17, told the Aktuality.sk news website.

Someone threw stones at the police as they were leaving. A few minutes later the police unit raided the settlement and one officer hit Horváth and took him to the car, he says.

Horváth has a black eye, and a cut above it. Police accused him of assaulting a police officer, claiming he was among those throwing stones.  He denies it.

According to police, the first police patrol from Markušovce village arrived on the scene but was surrounded by 200 aggressive locals and had to be reinforced by an additional two-member patrol. When one officer was injured in the leg, his colleagues fired three warning shots.

“The patrols then asked for [additional] reinforcements, as the attacks were continuing, with locals throwing stones and other items not only at police officers, but also at passing cars,” Leško told the press, adding that four units of the riot police and a police dog were then dispatched to tackle the unrest.

However, a local woman approached by Romed said that police attacked the Roma indiscriminately. She admitted that children and youngsters threw stones at them but certainly it was not 200 hundred people as police claim, she added.

“I don’t know what they would do with 200 adults throwing stones at them,” shed told Romed. “It would be something totally different if whole settlement attacked them.”

“Why they came to beat us when we did nothing to them,” he said, as quoted by the website. “Who will pay us for what they destroyed?”

The police at the press conference also presented an eight-minute video recording showing dozen of locals throwing stones and other items at police officers. The recording was of relatively low quality due to the lack of light, however.

Locals also attacked an ambulance that arrived at the settlement to assist a local woman who was giving birth, according to police.

Later, Emergency Medical Service confirmed that it sent an ambulance to the settlement because it was told that there is a conflict and some people could be injured. Police told the ambulance to stay one kilometre away to avoid trouble.

However, another ambulance carrying new-born was driving close to the settlement and some people from settlement attacked it, according to Jozef Minár of Emergency Medical Service, Actuality.sk reported.

Meanwhile, the police received a call at around 21:45 from a nearby facility of a former ore mine. A security guard announced that he would had to flee his office following an attack by locals, according to Leško.

At the press conference, Leško said that the number of similar attacks against police officers hasn’t been on the rise, but their intensity has certainly increased.

“Offenders – I don’t know for what reason – have intensified their aggression towards police officers,” he said.

There were 46 attacks on state employees in 2014 and 30 such attacks in first seven months of 2015, according to police statistics.

“The triggers of aggression of Roma in settlements is not only their bad social situation and usury, but also alcohol for sure,” Košice Regional Police Office spokesman  Alexander Szabó told Plus 7 dní weekly. “In most cases of their attacks there is also alcohol.”

Szabó went on that social environment also affects Roma behaviour and attacks against police could be seen as act of heroism there.

Roma activist and journalist Ivan Hriczko on the other hand said that agressive behaviour of  locals is caused by usury, extreme poverty. Each settlement has its own rules set by strong families living there. Usurers cooperate with police therefore victims know that they will not help them, according to him.

“The only way out is escape but only some of them succeed,” Hriczko told the weekly. “Many times they don’t even have money for bus ticket.”