THE BIG drop in the purchasing price of milk has caused problems for farmers not only in Slovakia, but also in the whole European Union. 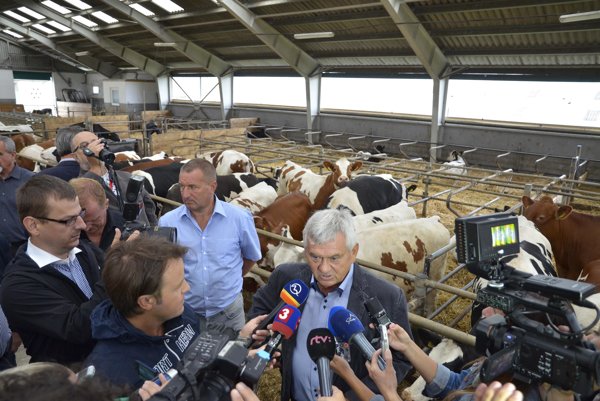 The biggest impact on the current situation is the current Russian crisis and abolition of milk quotas, said Slovak Agriculture Minister Ľubomír Jahnátek.

“Milk is a general problem of the entire EU, its prices continue decreasing,” Jahnátek said during his visit to a farm with dairy cows in Poprad, as quoted by the SITA newswire.

While about a year ago the average price of milk in the European market was 40-42 cents per litre, now it amounts to some 30 cents in developed countries. The last registered price per litre in Slovakia is 27 cents, which is about 10 cents less than last year at this time, Jahnátek added.

The sanctions against Russia harm primary producers, said Milan Semančík, head of the Slovak Agricultural and Food Chamber (SPPK). From the long-term point of view the current situation is unsustainable, and the farmers say they may protest against the milk prices, he added.

“The pressure is reflected in the price which is becoming lower and the difference between the price and production costs is bigger,” Semančík said, as quoted by SITA.

He also criticised the abolition of milk quotas, saying it resulted in increased milk production.

Jahnátek adds that the decision to abolish quotas was not timed well, and that since it came at a time when sanctions are imposed against Russia it only causes problems for primary producers.

Another problem is retail chains which significantly impact the prices.

The minister further stated that they have already informed the European Commission about the problem.

“If it does not deal with the unlimited influence of retail chains on prices, every support of the primary agricultural production is useless as everything extra the EC or countries, including Slovakia, give to farmers, ends as increased profit for retail chains,” Jahnátek added, as quoted by SITA.

He also claimed they will ask Brussels to temporarily restore the quotas.

Thank you for singing up. Shortly an email will be sent to the address you provided to verify your e-mail.
Error! Please try to register again later, your e-mail was not registered.
Your email is not in a correct format.
Please confirm you are not a robot.
Share on Facebook (105)Comments disabled