THE WESTERN Tatras began welcoming hikers and tourists later than the neighbouring High Tatras. This was mainly due to the mountain range’s remote nature and more difficult accessibility. 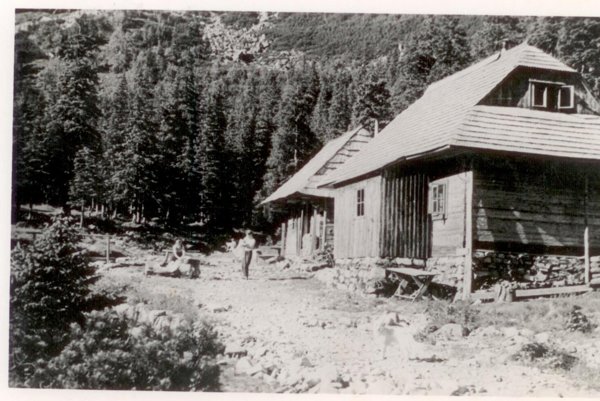 Visitors were not accommodated by luxury hotels or well-equipped sanatoriums and people often stayed directly in private houses in villages. Later, however, a few mountain chalets did appear and became very sought after.

One of the oldest was built high up in the mountains under the Ostrý Roháč peak. Ján Ťatliak of the Orava town of Dolný Kubín started building it in the 1930s. The construction works progressed slowly and the chalet, which bore the name of its builder, opened its doors to visitors only in 1941. This is also the year from which this postcard stems. We can see in it a simple cabin with a tool shed behind. The postcard describes the structure as “útulňa”, meaning a shelter, so it probably was very simply equipped.

During World War II Jews were hidden in Ťatliak’s chalet. Two young girls seeking to avoid deportation stayed, but their presence did not go unnoticed. Police from the nearest village, Zuberec, eventually found them and took them away.

Partisans who fought against Germans also used to stay here. The Germans tracked them down and on the night of December 9, 1944 made a raid in the chalet. Someone had warned the Partisans, however, and so they managed to flee just in time, wandering in the deep snow across woods to Zuberec. Then, they watched the blaze of the burning chalet which Nazis set aflame – as they also did to other chalets in the Roháče mountain range.

Two years later new construction of a second chalet started. It was completed in record time, two months. As compared with its predecessor, it was much bigger, offering 120 beds to tourists. But it too caught on fire and burned. On the night of May 29, 1963, during a strong storm, lightning struck the roof; and despite the efforts of its inhabitants and fire-fighters, it could not be saved.

Today, only a memorial board remains on the site.