THE CONSTRUCTION of a refugee camp for migrants from Syria close to the Austrian-Slovak border has caught Interior Minister Robert Kaliňák by surprise, the TASR newswire learnt on August 26. 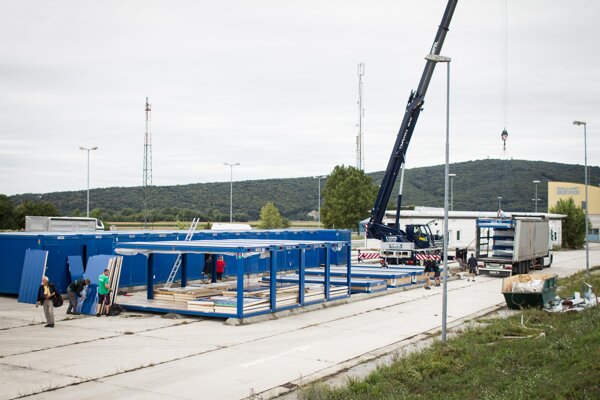 The construction of the refugee camp in Berg is underway. (Source: SME)
Font size:A-|A+36

Austria has started building a temporary camp for migrants in the village of Berg, located about 150 metres from the border with Slovakia and 4.5 kilometres from Bratislava, Sme daily reported on the same day.

The camp should help to relieve overcrowding in the existing facility in Traiskirchen, near Vienna, and the Slovak Interior Ministry has promised to return anyone who tries to cross the border. 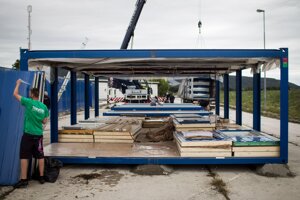 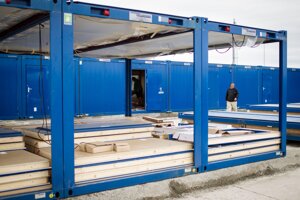 The construction of refugee camp in Berg (7 photos)

“The facility will serve as a short-term placement for refugees,” Gerhard Schödinger, mayor of neighbouring Wolfstahl, told the Aktuality.sk website, which broke the story.

The first people should arrive in the camp composed of container homes in the next few days. It will become a temporary home for approximately 40-60 Syrian refugees, according to media reports . The camp was originally supposed to be constructed in the nearby town of Marchegg, but a groundswell of opposition from the local citizenry thwarted the plans, TASR wrote.

Not even the Austrian Interior Ministry was in the know about such a plan, according to Kaliňák. The minister claimed that patrols in the area will be reinforced, although he does not perceive the refugee camp as a security threat.

Bratislava city officials were also not told in advance by the Austrian authorities that the camp would be built, according to TASR.

Kaliňák stressed that the site of the camp is not appropriate for a number of reasons, with Slovakia already conveying its objections to Vienna. Kaliňák, for instance, sees an increased danger of road traffic accidents, as children from the camp might run onto the road which is the main transport artery between the two countries.

The Interior Minister said that it would have been fair and decent to notify Slovakia about the construction plans in advance, pointing out that Austria had often voiced its opinion on Slovak projects in the past when it felt they might have impact on its own land. However, Kaliňák claimed that it is premature to assess how the communication gap between the two states developed.